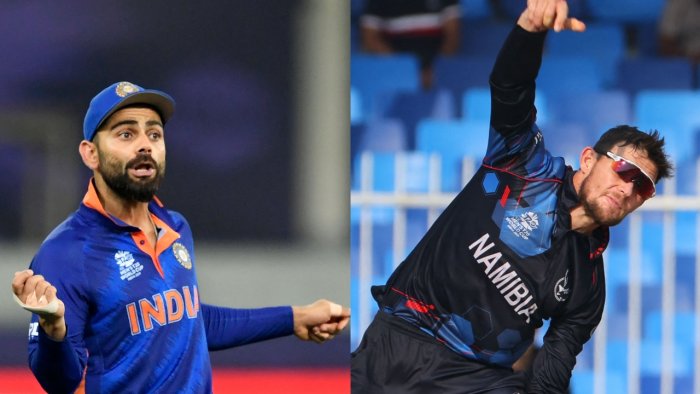 India’s hopes of qualifying for the semi-finals of the 2021 T20 World Cup flickered briefly following two massive wins, but New Zealand extinguished the flame with clinical precision. Beating a dispirited Afghanistan by eight wickets, the Kiwis joined Pakistan as semi-finalists from Group 2. India doesn’t have much to play for when they take on Namibia in Match 42 of the T20 World Cup at the Dubai International Stadium. But the Men in Blue will want Virat Kohli’s T20I captaincy tenure to end on a good note, especially with Ravi Shastri also on his final assignment as India coach. The following article provides an insightful look at the preview of the India vs Namibia T20 World Cup Match.

India and Namibia haven’t played a T20I against each other to date. Set to lock horns against each other in the shortest format for the first time, no head-to-head numbers are available for this match. In conclusion, their match at Dubai on Monday will mark their first-ever T20I encounter.

Despite a fascinating start to their campaign during the qualifiers, Namibia’s run in the super-12 has been rather underwhelming. They’ve failed to make any sort of an impact thus far and have been vastly ridiculed by their opponents. Despite losing all four of their matches thus far, Namibia would like to end their run with a feel-good victory. On the other hand, India’s run has been dreadful in the tournament. This is the first time they’ve been knocked out of the competition in the group stages since 2010. The men-in-blue started their run by facing humbling defeats at the hands of arch-rivals Pakistan and New Zealand. They tried to steady the ship with two dominating victories over Afghanistan and Scotland but it was too little too late. The damage was done and following Afghanistan’s defeat by New Zealand, the Indians were knocked out of the T20 World Cup.

Walking into the field for the final time as skipper, Virat Kohli would love to end his T20 captaincy run on a high. Fans have been craving a classic Kohli inning and it’s about time we get to witness one. A lot of eyes would also be on Ravindra Jadeja following the chaos he left behind in the previous match against Scotland. In addition to this, David Weise would have his eyes on guiding Namibia to its first victory in the tournament. The all-rounder has been nothing but sensational throughout and will hope to do the same in their final match against India.

Both India and Namibia are out of the 2021 T20 World Cup heading into the match. That being said, we may expect an all-out assault from both sides as they’ve got nothing to lose. The match will also mark the end of the Virat Kohli era as the talisman batter will step down from leadership duties following the conclusion of the tournament. Both the teams would want to express themselves and walk out of the tournament with something to remember. Despite the one-sided nature of the encounter, the match promises to be a riveting encounter with both sides wanting to prove themselves.

Team 1 (If India is batting first)

Team 2 (If Namibia is batting first)