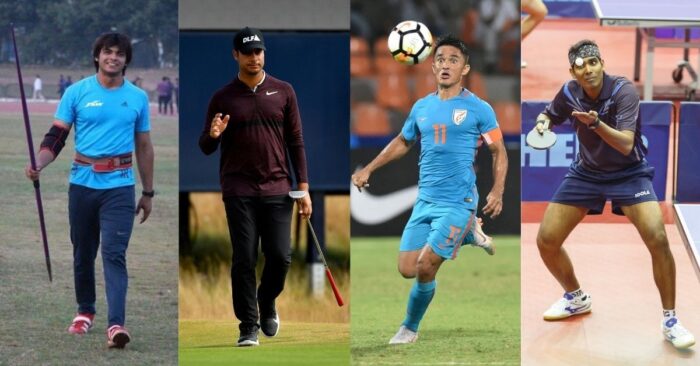 The Major Dhyan Chand Khel Ratna Award is the highest sporting honor of India. This honor is awarded annually by the Ministry of Youth Affairs and Sports. The national sports committee recommended a list of eleven (11) athletes for this award. The year 2021 has been great for India- sports-wise. Many athletes brought back laurels to the country in the 2020 Tokyo Olympics and Tokyo Paralympics. Here is a list of eleven elite athletes are nominated for Khel Ratna Awards 2021.

Everybody knows the Golden Boy of India- Neeraj. He quenched the thirst of every Indian by winning a gold medal at the Tokyo Olympics. He also became the first Indian to win any medal at the track and fields event at Olympics.

Dahiya is an Indian freestyle wrestler who won a silver medal at the Tokyo Olympics. He brought back lots of pride for the nation. He has higher hopes for the Olympics next year and aims to bag a gold medal in wrestling.

Chhetri is the first Indian footballer to be recommended for India’s highest sporting award. Football is famous in India. However, Indian players do not receive enough support from our country. Sunil Chhetri has now become the face of Indian football.

All the hard work of the Indian Hockey Team paid off when they won the Olympic Bronze medal. PR Sreejesh was the star goal-keeper who saved goals in the most crucial hours. Sreejesh is one of the athletes nominated for the Khel Ratna Awards 2021.

Also Read- Indian Men’s Hockey Team, The Most Successful Team Ever Of Olympics

Lovlina Borgohain is an Olympic bronze medalist. She is only 24-years old and comes from the North-Indian states. Above all, she is the third Indian boxer to win an Olympic medal.

Raj is the face of Women’s Cricket in India. She is the Captain of the Indian Cricket team in Test and ODI formats. Mithali is a right-handed opening batswoman and an occasional right-arm leg-break bowler. In addition to the perfect games, she has also matched unachievable records.

Pramod Bhagat is an Indian professional Para-badminton player. Bhagat is the first player from Odisha who has been nominated for this honor. He is currently world number one after winning a gold medal at the Tokyo Paralympics.

Sumit won a gold medal in the men’s javelin throw F64 category at the Tokyo Summer Paralympics. He holds the current world record after throwing 68.55 meters in the Paralympic final.

Indian Paralympian Avani Lekhara is the first Indian woman to win two medals at the Paralympics. She has been recommended for the Khel Ratna Awards 2021 for her exemplary performance.

Krishna Nagar is an Indian para-badminton player from Rajasthan. He was ranked world number 2 in para-badminton men’s Singles after winning a gold medal at the Tokyo Summer Paralympics.

Manish Narwal is an Indian Para Pistol Shooter. He received a gold medal in shooting at the Tokyo Summer Paralympics. As a result, he now holds the fourth rank worldwide.

Major Dhyan Chand Khel Ratna Award was previously known as the Rajiv Gandhi Khel Ratna Award. Prime Minister Narendra Modi renamed India’s highest sporting honor after legendary hockey player Major Dhyan Chand. No one can forget India’s record show in hockey at Tokyo Olympics 2020. As a result of this India received a medal in Hockey after 41 years. Therefore, PM Modi changed the name of the award. In conclusion, no matter who wins the award every player mentioned here is the national hero. The pride they brought to the nation is above all awards and felicitation.