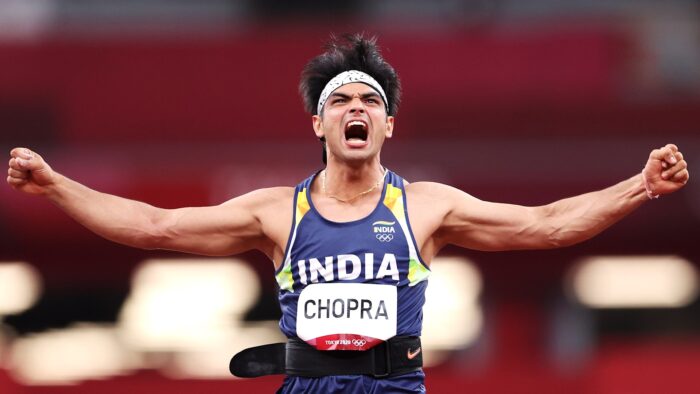 Subedar Neeraj Chopra is an Indian athlete who is ranked second internationally by World Athletics. Chopra is the first Indian athlete to win a medal in track and field events for India post-independence. Neeraj Chopra won a shining gold at the Summer Olympics 2020 in the event Javelin Throw. Here are a few details about Neeraj Chopra Net Worth which you need to know about this shining star:

Neeraj Chopra was born on 24 December 1997 in Khandra village, Panipat, Haryana. His parents are Satish Kumar and Saroj Devi and his family are largely involved in agriculture.

The Indian Army was impressed by Neeraj’s performance in the South Asian Games. They recognized his potential and offered him a direct appointment as a Junior Commissioned Officer (JCO). He was offered the position of a Naib Subedar

Chopra’s total net worth is estimated to be at around $3 Million as of 2021. In Indian Rupees, his net worth is approximately INR 22.5 Crore. There is no doubt that his net worth is going to increase by leaps and bounds. He has done exceptionally well and brought back laurels for the nation. Neeraj has had a growth in his net worth over the year. His net worth from 2017 till today is as follows:

Neeraj Chopra has made his wealth by winning numerous championships and events. His main income source is match fees and brand endorsement. His monthly income is estimated at 25 Lakhs+ and his yearly income is around 3 Crores. After his win in the 2020 Tokyo Summer Olympics, he received cash rewards from various institutions in India. Here is a list of the rewards he received after he won the gold medal:

The endorsement fee of the Golden Boy Neeraj Chopra now equals the team India skipper- Virat Kohli and CSK captain Mahendra Singh Dhoni. Since his historic medal at the Olympics, his brand value has reportedly increased by 1000 percent. Earlier, Chopra’s fees ranged from 15-25 Lakhs, but now he has entered the big league along with the various star cricketers. It is expected that Chopra takes back home at least the equal sum (as Indian Skipper) if not more!

YouGov SPORT shared a report that recorded over 2.9 million mentions from over 1.4 million authors, which made him the most mentioned athlete worldwide during the 2020 Tokyo Olympics. His social media reach has surged to over 412 million. This means that he is all set to receive a heavy sum for various promotions and partnerships on social media too!