India’s Rakesh Kumar continued his imperious form as he beat Hing Kong’s Ka Chuen Ngai by a massive 13 point margin at Yumenoshima Park. With this win, Rakesh Kumar enters pre-quarters while his compatriot Shyam Sunder exited in the second round.

This comes a day after Rakesh Kumar shot the highest score of 699 out of a maximum 720 by an Indian para archer in the qualification round. 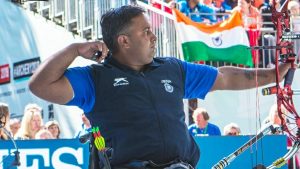 Rakesh has been in very good form coming into the grandest stage of them all – the Paralympic Games.

He won an individual gold medal at the 7th Fazza Para Archery World Ranking Tournament in Dubai during the first half of 2021. Here Rakesh had a near-perfect four ends as he scored 144 out of a possible 150.

There was a massive chasm between the pedigree of Rakesh and his opponent. He shot nine perfect 10s whereas his Hong Kong rival could manage to shoot only four 10s. Now, Rakesh Kumar will face a tough opponent in Pre-quarters with Slovenian Marian Marecak who is a two-time olympian.

Later in the day, Shyam Sunder suffered a narrow defeat against the USA’s Matt Stutzman. Matt’s trophy cabinet includes a silver medal he won in the 2012 Paralympic Games in London, UK.

It was a close fight between Shyam and Stutzman but the fourth end proved to be moving. Here the American sealed the deal with a perfect 30/30 which the Indian couldn’t match despite his best efforts.

Also Read: Who is Sharad Kumar, one of India’s medal prospects in high jump at the Tokyo Paralympics ?