Bhavina Hasmukhbhai Patel defeated China’s Miao Zhang in the class 4 semi-final to enter the gold medal match. She overwhelmed her Chinese opponent in a very tense and hard-fought match.

Zhang is a former World No.1 and the current world number 3wherewas the 34 years old Bhavina is ranked 12th in the world. Traditionally, the Chinese have had a great dominance over the table tennis medals tally. Bhavina Patel came up short against Zhang in he closely fought the first game. But in the second and third set, she regained momentum and came out all guns blazing as she made short work of her much-fame Chinese opponent.

After two consecutive set wins she was leading by 2-1. In the third game also Bhavina looked in imperious touch as she blasted her Chinese opponent in just four minutes.

As expected, Zhang came back strongly in the fourth game as she understood that this was her last chance to stay in the game. The Chinese showed her class and won the set. 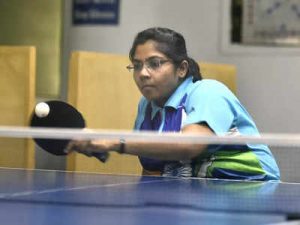 In the fifth set, Bhavina started really well racing to a 5-0 lead. But the Chinese clawed her way back into the contest as he came within a point of the Indian. after this Bhavina took a break and with a bit of pep talk from her coach she came back and raced to a victory.

In the 11 times that Bhavina faced Zhang, she couldn’t secure a win. But win she did when it mattered the most.

Bhavina will now face her arch-nemesis, Zhou Ying of China who has earlier defeated the Indian in straight sets.