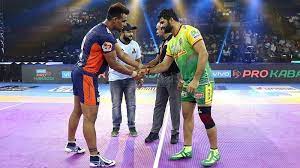 Successful raids directly impact the scorecard with with its direct relation with both defense and raid points of teams. The Pro Kabaddi league features one of the best raiders in it. These raiders have never failed to put on show for the fans with absolute thunder stealing performances. So here is a list of top five players with highest successful raids in pkl:

Coming from the Hoshiarpur district of Punjab Maninder completed his graduation from Khalsa College, Amritsar. Season 6 was one dream season for this focus raider with him scoring 206 points in just 22 matches. Currently holding the record of being the faster raider to reach 500 points Maninder was also appointed as Bengal Warriors captain in season 7. With 79 matches played he holds his fifth position with 586 successful raids.

The Padma Shri and Arjuna Award receiver in 2019 makes it at number four on our list. He has also been the part of the national side that won gold at Asian Games 2014. Ajay captained Indian team in 2017 and led them to win gold at the Asian Kabaddi Championship 2017. With 115 matches played he has an impressive record of 640 successful raids.

Probably the best defender of all time and one of the busiest on the auction table Deepak Niwas hooda. The two times South Asian Games gold medalist hails form the Rohtak district of Haryana. He has featured in all successful seasons of Pro Kabaddi League and failed to put on a show for the fans. Having great agility and speed Deepak holds 698 successful raids in 123 mat appearances.

The 6ft tall belongs from Bijnor district of Uttar Pradesh. He has been one of the most successful player and impactful player in PKL history . Rahul played six consecutive seasons for Telugu Titans after which he was bought by Tamil Thalaivas . He finished at the top of the raiding points in season 4 making him the best raider of the season . At second position currently at our list Rahul is having 788 successful raids with 122 encounters.

He is the first player in PKL history to reach 1000 points and hold many multi records. There has no doubt about his form in any season . He led his team to three consecutive finals in between 2016-2017. Playing in green color for Patna Pirates Pardeep gave the best ever performance by a player by gaining 369 raid points . The obvious number one is close to 900 and has scored 880 successful raids in 107 matches.

For more such interesting sports news do visit : The Sportslite