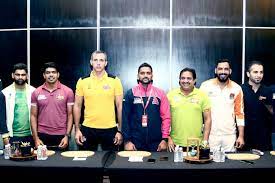 Most underrated word can be termed as a coach . They are the real reason behind every teams success and provides vision for the future plans of team .Thus, just like any other sport kabaddi also provides a depth in coach field. So here is a list of Top Five Best Coaches In Pro Kabaddi League 2021 :

The Arjuna Awardee is one of the most famous name in Kabaddi . Not only as a coach but also as a player records for Rakesh just goes on and on. The 39 year old has won three consecutive Asian Games Gold medal from 2006-14 and two World Cup golds held namely at Mumbai and Panvel. Kumar was the highest bid at the auction in the inaugural season. He was signed as the head coach of the Haryana Steelers in the seventh season and would be aiming at the championship this year.

The Dronacharya Awardee has been successfully renowned as Dabang Delhi’s coach in season 8. There have been a massive improvement in the Delhi’s side since last two seasons under Kumar’s guiding. First he managed to take the team to the Playoffs in his debut campaign. Second he improved the performance by making the side runner up of season 8. Hooda believes that the team could bag the trophy this year.

The head coach of the last season winning side Bengal Warriors is one of the most successful name when it comes to coaching . Moreover he has lifted the trophy under his coaching and head coaching not once but twice. The 2001 Arjuna Award winner also coached the Argentina team in World Cup – 2016. Ramesh would be likely be expecting the number of Championship winning streak shifting from 2 to 3 in season 8.

Singh is the only coach to win the PKL title more than once. Also he has been acknowledged with Arjuna Award for his amazing performances at the Asian Games- 1998 and 2002, where he helped India win two gold medals . The deputy sports director of Haryana state would be aiming to become the first coach to lift championship thrice.

The biggest name in National kabaddi Championships starts with Randhir Singh . Representing as a PKL coach Singh took the Bengaluru side to pick the 2018 season league trophy . The Godfather of the Indian Railway Kabaddi has won multiple championships with both men and women at the national level. Hopes from Randhir would again be high from the Bengaluru side as the 8 times national championship winning side coach them in season 8.