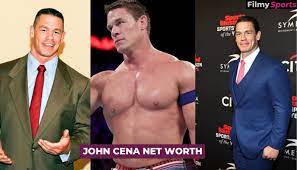 John Cena is among the most decorative superstars of all time. Not only in his home country but worldwide he is recognized for his Never Give UP attitude. Considered very famous among youth gives him more favorable chance for a sponsorships main face. So here we discuss John Cena’s Net Worth and other details:

The 43 year old famous athlete has tied with Ric flair for the most number of world championships. Not only this but also he is a Five time U.S Champion ,four times Tag Team champion and has main evented Wrestlemania for record five times. He is also two time Royal Rumble winner along with one Money In the Bank win.

Along with a fortunate professional wrestling career Cena also enjoys some cinema days. His first movie was produced by the WWE studio (The Marine) which turned out to be very prosperous for him . Likewise Cena has also made appearances at movies namely Trainwreck, Sisters etc.

With an admirable public respect and name Cena’s brand value has overgrown with years. With a record breaking deal with WWE Cena’s salary is recorded around $9 million. One of the highest paid WWE athlete along with his famous acting career registers net worth around $60 million.

An engaged personality with many charities and shows has convinced many famous brand to come to his doors. Some of his famous sponsors includes healthy industry names for instance like Subways, Gold’s Gym, YJ Stinger and many other.

Cena spent enormous $3.4 million on his residence house located in Florida, America. The grand house includes an outdoor swimming pool, an ivy-themed kitchen and a monumental garage for every type of vehicle he owns.