Top Five Players Of All Time With Highest Super Raids 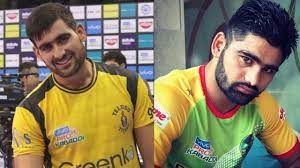 Super raid is defined as a raid in which the raiders scores three or more points in a single raid. Such raids put great show for the fans and are enough to change the momentum of the match. There are many players who have delivered them at big stages some of which we are going to talk about. So here is a list of top five players of all time with highest super raids:

Top five Players Of All Time With Highest Super Raids

The 2016 Kabaddi world cup gold medalist belongs from the region of Nalagarh of Himachal Pradesh . Ajay also captained Indian team in 2017 and led them to win gold at the Asian Kabaddi Championship 2017. Moreover, the 2014 Asian Games Gold medalist, currently makes it at number 5 with a total of 23 super raids.

Rahul has been one of the most successful raiders too in Pro Kabaddi League with some extraordinary performances. For instance he has been the part of the national side that won Gold medal at the South Asian Games 2019. Chaudhary likewise was rewarded as the best raider of season 4 with him earning 146 raid points in the season. He has a total of 24 super raids in his 122 match appearances.

Rishank has an average strike rate of 48.89 percent on the mat . Additionally ,He began his PKL career officially with the strong U Mumba side and continued till 4th season with them. He has contributed for his team with raids as well as with some decent tackling. Playing in the light of the Bengal side in season 8 Rishank has 25 super raids till now in just 121 matches.

He is one of the few players in addition with Siddharth Desai to give competition to Pardeep Narwal . Pawan is also the 2019 South Asian Games gold medalist national side member. Popularly known as the “Hi-flyer” he has some major records in PKL , he currently holds the record of most points scored in a single match, coupled with most points by a player in a PKL final. The Bengaluru Bulls focus raider has 26 super raids with 80 matches played.

Born in the year 1997 Pardeep has given new heights to the Pro Kabaddi League. In the debut season he could not deliver his performance, but just after shifting to the green colors of Patna Pirates Pardeep redefined himself and scored 92 raid points in 14 matches. The Jakarta Asian Games Bronze medalist tops our list with the most 53 super raids in his total 107 appearances.

For more such interesting kabaddi news do visit : The Sportslite