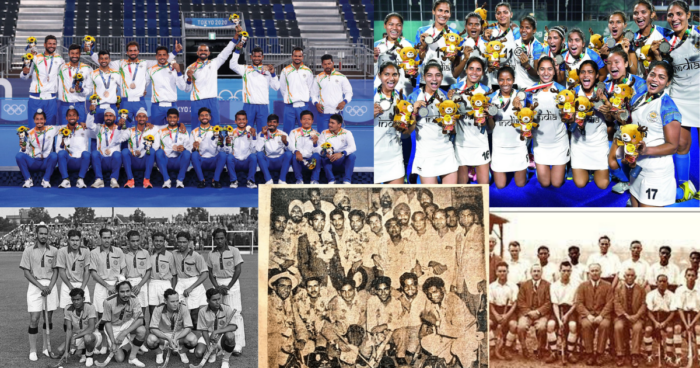 Hockey as a tournament revolves around two Asian giants- India and Pakistan. The arch-rivals have a record of facing each other in the initial seven Asian games hockey finals. India is the most successful team ever in the history of the Olympics. They currently top the chart with eight gold medals. However, the golden era did not last long. There was a major downfall of hockey. In this article, we will discuss the rise and fall of hockey in India.

India learnt about modern-day hockey from the Britishers. With the availability of large plots as a playing field, it became popular really quickly. After the formation of the International Hockey Federation, hockey gained permanent Olympic status. This was the beginning of India ruling the sport. Hockey as a sport was definitely taught by the British but India conquered the world!

The Golden Era and World Domination

The 1926 tournament organized by the IHF was the first international tour. Indian hockey men’s team played 21 matches and won 18. This tournament saw the emergence of a young Dhyan Chand. What some people thought back then was he is playing good momentarily. However, no one thought that he would be the best hockey player the world has ever seen. This was only a trailer of the dominance that India was to pose!

Indian Hockey Team played its first Olympics in 1928. It was just the beginning of a legacy – decorated with eight gold medals. It goes without saying that the Indian team clinched the gold in their first-ever Olympics. India scored a whopping 29 goals without conceding any! Dhyan Chand scored 14 of them. The Indian team consecutively won gold in the next two Olympics too. After the second world war, India had their own wizard. In the years 1948, 1952, and 1956 India captured the gold again. Therefore becoming the most significant nation in hockey. However, these wins meant more to us, because these medals came back to an independent nation.

In the 1970s the Indian women Team went international. They made their first appearance in an international competition and finished at a credible fourth position.

Also read- Indian Men’s Hockey Team, The Most Successful Team Ever Of Olympics

The stagnation and heartbreaking downfall

The 1980s came with a good aura for Indian hockey. The men’s won their eighth Olympic gold at Moscow. At the Asian Games, 1982 the women’s Indian hockey team clinched a historic gold. In addition to that the men’s team won silver. However, there were no more incoming accolades for India henceforth. The period 1980s to early 2000s were the worst for Indian hockey. There were minor rises but nothing lasted long. For instance, Dhanraj Pillay’s debut breathed new life into the sport. Unfortunately, without enough support he was unable to inspire a larger group. Even though he was able to end the  India’s Asian Games gold draught single handedly, not many people remember him.

The biggest reason for this tremendous downfall was astroturfs. The local players continued playing on natural fields. As a result, India kept losing its position on global platforms. Changes in the rules, physical fitness, internal politicking were also cited as reasons for the major downfall of India.

The most awaited REVIVAL

Even though hockey came into the limelight after Tokyo Olympics, its revival began long back. In other words, the performance and support were the results of the revival that started years ago.

After waiting for years, the Indian Mens’ Hockey Team finally gave a podium performance. In the 2010 Commonwealth Games, they won silver. Later they bagged a bronze in the 2010 Asian Games. The men qualified for both the 2012 and 2016 Olympics. However, it was the womens’ team that stole the spotlight! The nation rejoiced as they qualified for their first Olympic Games in 36 years.

In conclusion, in the Tokyo Olympics, 2020 Indian hockey found its feet again. Heart of every Indian fluttered with pride when the men broke the 41 year jinx with a bronze. The women were no less than champions for us! They narrowly missed their bronze and finished fourth. But, their win against Australia was tremendous!

The rise and fall of hockey in India have been very prominent over years. However, it is now time that we reclaim our old glory. As we proceed, no will we be able to dominate the sport again on the global stage.