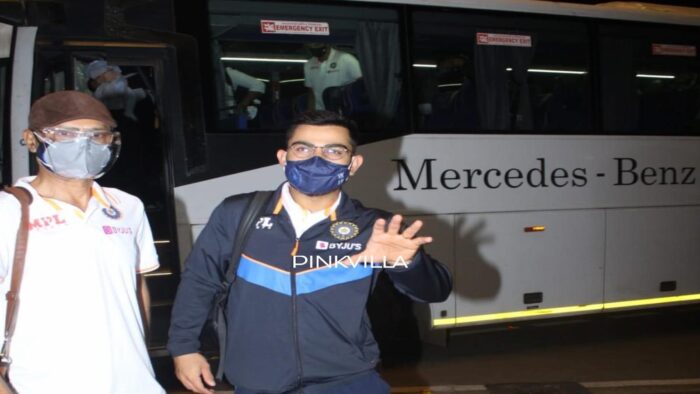 Indian test Team led by Virat Kohli departed for the South Africa tour. The South Africa tour will kick off from December 26 with 1st Test between two teams. Meanwhile, BCCI shared glimpses of Indian team players travelling. However, Kohli made the headlines for a separate reason. Virat Kohli and his wife Anushka Sharma have been particular in not exposing their daughter to the media. And when Indian Test team depart for South Africa tour, Test captain Virat Kohli asks photographers not to take daughter Vamika’s photos.

As the Indian team bus arrived at the airport gate, Virat Kohli was one of the first ones to get out of the Team bus. He asked the media to not click pictures of his daughter. Apart from Kohli, his wife, and Bollywood actress, Anushka Sharma also came out of the team bus. Virat and Anushka’s daughter Vamika was strapped around her mother Anushka Sharma. And the Indian test skipper, Virat Kohli, said “Baby ka photo mat lena” which means don’t take pictures of the baby.

Meanwhile, Virat and and Anushka haven’t exposed their daughter to the media yet. They previously sent a note to the media also to help them in protecting the privacy of their child.

“We had requested Virat not to step down as T20 captain but he didn’t want to continue as captain. So, the selectors felt that they cannot have two white ball captains in two white-ball formats. That’s too much of leadership.”

But, Virat Kohli, in his press conference contradicts the BCCI president. Virat mentioned that no one asked him to not step down from T20 captaincy. Till now, we have no confirmation of what’s right and what’s wrong. As of now, Rohit Sharma will be the new captain of India in White Ball format.

Also Read: 5 Player Vs Cricket Board Fights In Cricket History

Meanwhile, the Indian Test Team will face South Africa in the opening test on December 26 in Centurion. India’s white-ball captain Rohit Sharma will miss the Test series due to a hamstring injury. Priyank Panchal was named as Rohit Sharma’s replacement. Panchal is a consistent scorer in the domestic circuit and has played 100 first-class matches. Apart from Rohit, India will also miss the services of Ravindra Jadeja and Axar Patel. The South Africa tour is Rahul Dravid’s first overseas tour as the Head Coach. India will look to win their first series victory in South Africa.