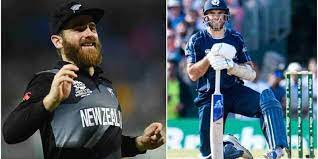 The fate of the entire group hangs in the balance as the Blackcaps are set to square off against Scotland. Billions of Indian fans would be rooting for Scotland, hoping for an unlikely miracle. There is a lot left to play for and the stakes for everyone in the group are at an all-time high. The following article provides a detailed preview of the New Zealand vs Scotland T20 World Cup Match.

New Zealand and Scotland have locked horns only once before in T20 International matches. The one-off encounter took place in a Group D fixture of the 2009 T20 World Cup back in 2009. New Zealand was able to come out on top in the rain-affected 7-over match and was able to chase the 90-run target by 7 wickets. However, those times were different as Scotland was still trying to crack the code in international cricket. Over the years, Scotland’s slow and steady rise in T20 cricket has made them a force to be reckoned with as they promise to not back down without putting up a fight.

New Zealand had a disappointing start to their campaign with a defeat to Pakistan. However, they were able to dust off the setback with a monumental win against India. The blackcaps were able to bring a positive change to their net run rate as well as this may help them when the tournament reaches its crescendo. On the other hand, Scotland’s start to the super-12 has been underwhelming, to say the least. After an unbeaten run in the qualifiers, Afghanistan mopped the floor with Scotland with a staggering 130-run victory. They were also unable to fend off Namibia as the chances of their qualifications grow slimmer as the second passes. It means that with nothing in the bank, they now face an uphill task against New Zealand, India, and Pakistan in a span of five days.

Leggie Ish Sodhi and seamer Trent Boult would be on the lookout to destroy yet another batting line-up after the massacre they left behind in the match against India. In addition to this, Kane Williamson will also be on the lookout for some runs. The Kiwi skipper wasn’t amongst the scorers in New Zealand’s first match and largely played second fiddle to Daryll Mitchell against India. Being one of the best batsmen in the world irrespective of the format, Kane isn’t far from one of his classic knocks.

We can expect another slow-burning game of cricket, and the fact that this is a day game is unlikely to throw up a surprise. The team winning the toss is expected to chase and that’s been a safe trend since IPL 2020; 6 out of 6 games in this period have been won by the team batting second. Despite the one-sided affair, there is a lot left to play for both sides. Who’s going to come out on top? Our guess is as good as yours.