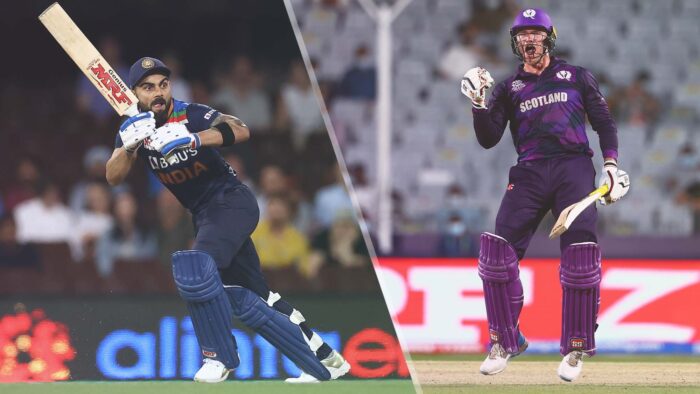 After a dominant victory that set fire under their campaign, India stands toe-to-toe with an unfamiliar foe, Scotland. Heading into the match with their backs against the wall, there is no margin for error for the men-in-blue as their qualification chances hang in the balance. Despite being knocked out of the tournament, Scotland would love to leave maximum damage on their way out. Billions of fans would be glued to their TV screens as the Men-in-Blue walk into square-off against Scotland. That being said, here is a detailed preview of India vs Scotland T20 World Cup Match.

There will be a sense of unfamiliarity when India takes on Scotland in a game that holds a lot of value for the former. Despite having played innumerable T20 matches over the years, Scotland and India have shockingly locked horns only once in T20Is. Unfortunately, that match was washed out due to rain during the inaugural edition of the T20 World Cup. The only official match between the two sides was an ODI match that took place way back in 2007 in Glasgow. India was able to overcome its Scottish challengers by 7 wickets without breaking much of a sweat.

India’s campaign started with back-to-back drubbings against Pakistan and New Zealand within eight days of the tournament proper. Despite the annihilation of Afghanistan, India’s semi-final prospects still remain hanging in the balance as they face Scotland in another do-or-die encounter. Scotland, on the other hand, has had quite an underwhelming start to its tournament. With thrashings coming at the hands of Afghanistan, Namibia, and New Zealand, Scotland is very well out of the tournament.

With the scintillating pair of openers back in form, all eyes would be on India’s middle-order namely Virat and Suryakumar. The duo is yet to produce a defining knock in the tournament, so you can expect them to set the stage on fire with the willow. On the other side, Henry Munsey has been silent with the bat as of late. The ravishing opener would be determined to prove his merit on a big stage and no other stage would be bigger than the T20 World Cup itself.

Two days after defeating Afghanistan, Virat Kohli and Co will be eyeing another big win, this time against Scotland, to boost their net run-rate and keep alive their slim chances of qualifying for the semi-finals. On the other hand, Scotland would be on the lookout for their first victory at the T20 World Cup 2021. We can expect another slow-burning game of cricket, and the fact that this is a day game is unlikely to throw up a surprise. Despite the one-sided affair, there is a lot left to play for both sides. Who’s going to come out on top? Our guess is as good as yours.