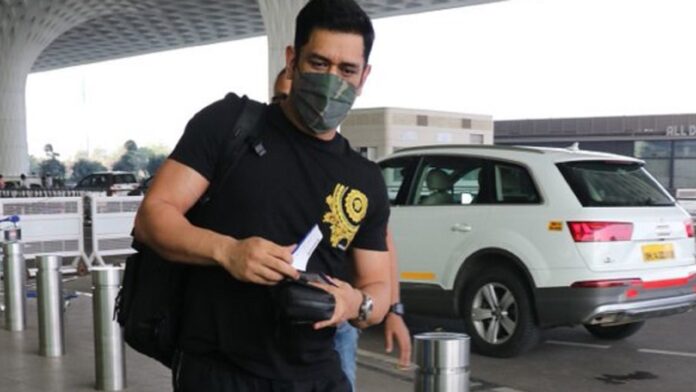 The most famous captain in the world MS Dhoni, with his daughter Ziva Dhoni and wife Sakshi Dhoni, spotted at Mumbai Airport before leaving for Jaipur. It is Dhoni’s first appearance after being retained by Chennai Super Kings ahead of IPL Mega Auction 2022. Before getting busy again in the cricket field, Dhoni is spending time with his family. The former Indian captain left for Jaipur for a family wedding. He, his wife and daughter Ziva could not escape the camera at the Mumbai Airport. Fans were amazed to the fitness of MS Dhoni at the age of 40. He was seen wearing black t-shirt. His fitness surprised the fans.

MS Dhoni still amongst the fittest

MS Dhoni looked in peak as he and his family leave for Jaipur. The former Indian captain last played for India in the 2019 World Cup. Dhoni was seen exiting the car followed by daughter Ziva and wife Sakshi. MS Dhoni looked in peaked shape even at the age of 40 years. Dhoni wore a black tee with joggers with side stripes and boots. Fans were amazed to see the fitness of MS Dhoni. The video got viral on social media which shows MS Dhoni exiting the car with his wife and daughter. Watch below!

Former Indian captain MS Dhoni rarely make public appearances. He is even known to be a social media recluse. However, Sakshi shares updates on her Instagram page. Recently, she treated fans with images of Dhoni sipping tea. Last month, Sakshi celebrated her birthday with Dhoni and friends at home. Images and videos from the fun cake-cutting were shared on her Instagram Stories. Chennai Super Kings also shared MS Dhoni on their official handles.

Meanwhile, Dhoni was last seen in action as Team India’s mentor in T20 World Cup 2021. However, the journey of Team India in this World Cup was over soon. The team could not reach the knockout. Dhoni was retained by Chennai Super Kings for Rs 12 Crore ahead of the IPL 2022 Mega auction. Under Dhoni’s leadership, CSK won the title in IPL 2021, which was CSK’s fourth IPL title. In his 40s, Captain Cool is yet to hang his boots for the franchise and will continue to lead them in IPL 2022.

Jatin Sethihttp://thesportslite.com
Passionate about Cricket and Writing. Just following my passion and doing what I like the most.
RELATED ARTICLES
Couples