The SportsLiteSports at just one click!
HomeCricketTop Five Biggest Records of Mumbai Indians in IPL
CricketIPL 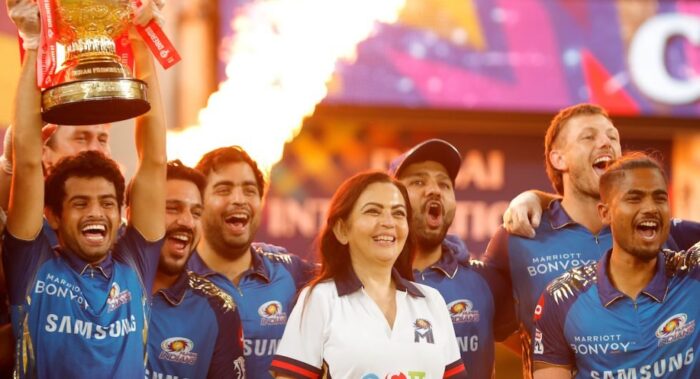 If there is any team that is considered as the “king of the jungle” as far as the IPL is concerned, it’s none other than ‘the real kings’ of the tournament Mumbai Indians. Over the 13-year long history of this team, they’ve created many records along their journey. Here’s looking at the top five records of Mumbai Indians in IPL.

When it comes to crushing their opposition with a thumping victory Mumbai Indians find themselves on the top of this list. They hold the record for the largest victory margin in the history of IPL. In the year 2017 Mumbai crushed Delhi with a margin of 146 runs.

Mumbai Indians also hold the record for the fastest chase in IPL history. In the very first season of the tournament, Mumbai was up against KKR. Having won the toss and deciding to field, Mumbai restricted Kolkata for a paltry 67. In reply, Mumbai Indians opener Sanath Jayasuriya went absolutely berserk and smashed 48 runs in just 17 balls that helping his team chase the total in just 5.3 overs. This remains the fastest total chased ever in IPL history.

2. MOST WICKETS TAKEN BY A BOWLER

The batsmen set up the game for the team but the bowlers win you the game. Being the most successful side in the tournament, it’s hardly a surprise that Mumbai has the best bowling attack as well. Mumbai was blessed to have the yorker king Lasith Malinga in their team. Malinga holds the record for the highest scalps taken by a bowler in IPL with 170 wickets to his name in just 122 games. He’s miles ahead of any other bowler on this list.

After having a dream season in the year 2010, Mumbai finally got their hands on the trophy in 2013. This started a knack of winning trophies in every odd year as they went on to win titles in the years 2015, 2017, and 2019. Mumbai also won the last season of the tournament held in 2020. Which takes their tally of trophies to 5 which is the highest by any team.