The SportsLiteSports at just one click!
HomeCricket13th November in Cricket history: Rohit Sharma scored 264 runs against SL...
CricketPlayerToday's in History 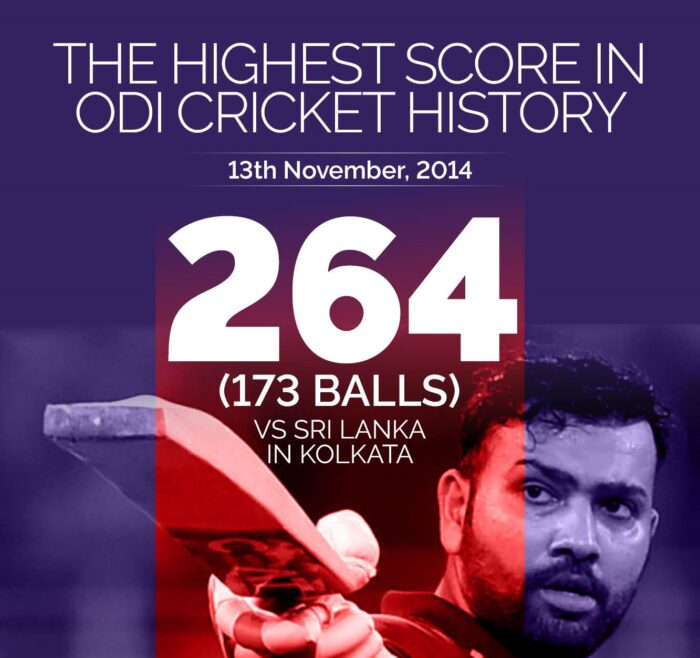 Rohit Sharma is one of the best batsmen in the history of White Ball Cricket. He is a man of records. Rohit has so many records to his name. He scored ODI double hundreds for fun, won five IPLs in its first 12 editions, scored five hundreds at the 2019 ODI World Cup, and when he finally got to open in Tests in 2019, three quick hundreds in his first series, one of them a double. Sharma became one of the colossal six-hitters of his era. He has the world record for highest score in ODIs. Rohit Sharma scored 264 runs in ODI.

Rohit Sharma, popularly known as ‘Hitman’ scored 264 runs in173 balls against Sri Lanka at the Eden Gardens in Kolkata. It remained the highest score by any batsmen in 50-over internationals. Rohit Sharma became the first man in ODI history to hit 250 runs as he inspired India to a comfortable 153-run victory over Sri Lanka in Thursday’s fourth one-day international. Rohit Sharma scored 264 runs in the ODI against Sri Lanka. If Sachin Tendulkar broke the glass ceiling for men’s ODI scores by becoming the first player to score a double century in the format, Rohit Sharma shattered whatever remained of it by crossing the mark three times. Of the three double centuries that the opening batsman has scored, his 264 off 173 balls against Sri Lanka on November 13, 2014 at the Eden Gardens became a benchmark for ODI scores.

Rohit had not played any international cricket for three months before the innings with a finger injury that he sustained in August that year. There were questions on whether Rohit should be taken back into the squad and if India should instead open with Ajinkya Rahane and Robin Uthappa.

The previous highest score in ODIs was New Zealand’s Martin Guptill’s unbeaten 237, which he scored against the West Indies in Wellington. Rohit himself would go on to score another double century in 2019, which also came against Sri Lanka.