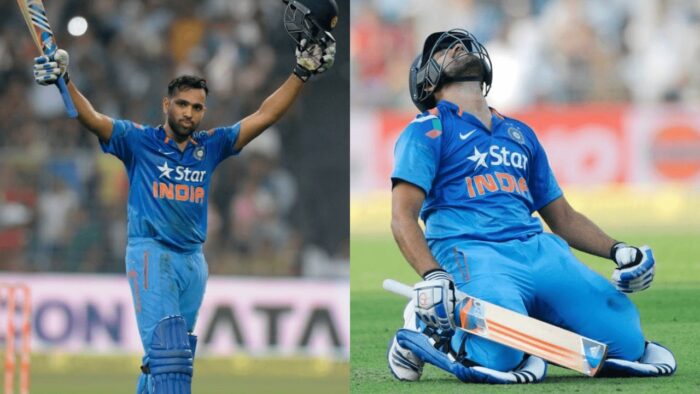 Today, Rohit Sharma stands among the best players in the world and arguably the best present day opener in limited overs format. Rohit made his international debut in 2007. But his initial few years in international cricket did not go well. Despite being talented, he kept getting in and out of the playing XI due to lack of consistency in batting. The 2013 Champions Trophy brought a big changeover for him, where he got a chance to play as an opener. Rohit grabbed this opportunity well and established himself as an opener. In this article we are going to mention Top Five Best innings of Rohit Sharma.

Rohit has so far scored 9205 runs in 227 ODIs at an average of 48.96. During this, he has also scored 29 centuries and 43 fifties. He is the only batsman to score three double centuries in ODIs. He is behind only Sachin and Virat among the batsmen who have scored the most ODI centuries for India. The 34-year old is noteworthy for playing big knocks. Without further ado, let’s start.

5th in the list of best ODI innings by Rohit Sharma is the century scored against West Indies in 2018. In this innings, Rohit scored 162 runs in 137 balls with a strike rate of 118.24. During this innings, he hit 4 sixes and 20 fours. Batting first, the Indian team scored 377 runs in 50 overs for the loss of 5 wickets. In response, the West Indies team was bundled out for 153 runs and India won the match comprehensively by 224 runs.

4) Rohit’s innings of 171 runs against Australia

The first match of the ODI series on the 2015/16 Australia tour was played at the Perth ground. Though it is considered challenging to score a century on the Perth ground, but a total of three centuries were scored in this match.

Like the rest of Rohit Sharma’s innings, this century did not come in a hurry. Playing smartly, he scored 171 runs in 163 balls, which included 7 sixes and 13 fours. Indian team scored 309 runs in 50 overs. Rohit’s ton went in vain as the Australian team won the match by 5 wickets with 4 balls to spare, as a result of centuries from captain Steve Smith and former captain George Bailey.

In 2016, the second match of the ODI series against Sri Lanka was played at Mohali. In this match, Rohit played an unbeaten innings of 208 runs in 153 balls while batting first. During his double century knock, he hit 13 fours and 12 sixes. This was the second double century of Rohit’s ODI career.

Thanks to Rohit’s century, India scored 392 runs in the stipulated 50 overs, in response to which the Sri Lankan team could only score 252 runs. India won this match by a huge margin of 141 runs. Rohit Sharma, who scored a double century, became the man of the match.

In the seven match ODI series played against Australia in the year 2013, both the teams were batting tremendously. The last match of this series was played in Bangalore. Australia won the toss and invited India to bat.

Rohit Sharma started off cautiously and completed his century in 114 balls. After this, Rohit played shots around the field and scored the first double century of his ODI career, adding 100 runs in the next 42 balls. In this innings, Rohit scored 209 runs in 158 balls with the help of 16 sixes and 12 fours. With the help of Hitman’s century, India set Australia a target of 384 runs. Chasing the target, the Kangaroo team was all out for 326 runs. Rohit Sharma was adjudged the man of the match for his cataclysmic knock.

The best ODI innings of Rohit Sharma came in the fourth ODI against Sri Lanka in 2014, an unparalleled Rohit Sharma came out to bat. He looked in fierce touch and thrashed the Sri Lankan bowlers all around the park. While batting, Rohit played his most memorable knock of 264 runs in 173 balls with the help of 33 fours and 9 sixes.

This is the highest individual score by any batsman in ODI cricket. Which is very gargantuan to outperform even today. During his innings, he also surpassed the record of most boundaries hit in an innings. A record that still stands firm. As a result of Rohit’s double century in this match, the Indian team scored 404 runs in 50 overs. In response, the entire Sri Lankan team was restricted to 251 runs. India won this match by 153 runs.