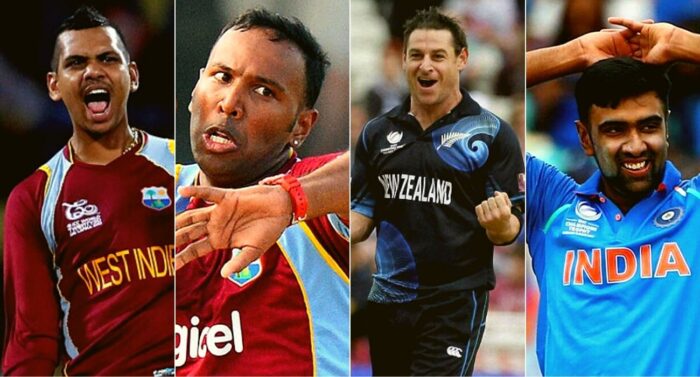 T20 is considered as a volatile format, where just one over has the capability to make or break you. In a format where hitting boundaries in dozens is treated as normalcy, bowlers are often left at the mercy of batters. With all those factors, maintaining a healthy economy rate in such an explosive format is quite a daunting task. At the outset, spinners have had a significant influence when it comes to having a better economy rate in the T20 World Cups. To enforce the previous point, no pacers feature in the top five (spoiler alert!). Above all, here is a list comprising the top five bowlers with the best economy in T20 World Cup.

Unarguably India’s best spinner of the past decade, Ravi Ashwin’s inclusion on this list shouldn’t really come as a surprise. On his way to play his fourth T20 World Cup, Ashwin has taken 20 wickets in just 15 matches. His stellar economy rate of 6.18 runs-per-over ensured that India kept things tight in the middle overs. Returning to white-ball cricket after 4 years, Ravi Ashwin would like to give his all for his nation.

Shane Warne ended his International Career with 1001 wickets yet he was the second-highest wicket-taker in all forms of the game. Check out the full list here: Top 5 Overseas Wicket-Takers In Cricket

The McCullum brothers have left quite an impressionable legacy behind in world cricket. Nathan represented the Blackcaps in 22 games in the WT20, and was successfully able to grab 23 wickets with an average of 17.34. Boasting an economy rate of 6.08, Nathan McCullum sits at fourth within the list of the top five players with the best economy rates in the T20 World Cup.

Former New Zealand captain Daniel Vettori grabs the third spot with a splendid economy of 5.83 in the T20 World Cup. Despite not having endless variations like some of the entries on this list, what makes Vettori stand out from the herd is his consistency with the leather. Daniel has played 17 matches in his WT20 career in which he has claimed 20 scalps.

Former West Indian leg spinner Samuel Badree occupies the second spot on this list. A leg-spinner by characteristic, Badree knows how to turn a web around the opposition. With his trademark sliders and googlies, Badree is tallied as the leading ploys to halt the run-flow of the opposition. In 15 matches he played in numerous versions, Badree picked 24 wickets with a noteworthy economy of 5.52.

Did you know that Aaron Finch once hit 14 sixes in an innings? Check out the complete list here: Top Five Players With The Most Sixes In A T20I Inning

Sunil Narine; the West Indian mystery spinner has been ruling T20 cricket for well over a decade. His customary carrom balls and doosras have troubled batters for years. Despite having played just two editions of the T20 World Cup, Sunil Narine has an outlandish economy of 5.13. No other bowler comes close to overthrowing the Caribbean from the top spot. Given his current rampaging form for KKR with both bat and ball in the UAE, the Windies would surely miss his services.