The SportsLiteSports at just one click!
HomeForever FactsU Mumba - History, Players, Records, and Everything You Need to Know
Forever FactsKabaddiPro Kabaddi League

U Mumba – History, Players, Records, and Everything You Need to Know 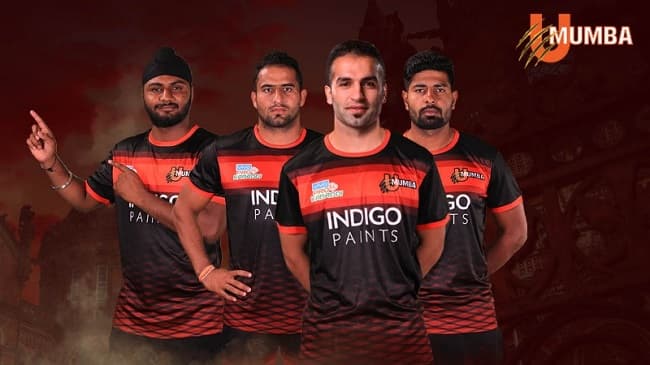 U Mumba is a Mumbai-based franchise that competes in the sport of kabaddi in the Pro Kabaddi League. This team has an essence of rich culture and flaunts it with all the pride. As already seen, the name of this team comes from the word ‘Mumba’. It is a tribute to the mother island that is the origin of the mega-city ‘MUMBAI’. The team U Mumba chose the color orange as the primary color of their jersey for a reason too! The city has an abundance of fishermen and they use the color orange to stand out and be identifiable. The team used this rich history to send out a message to the world that they will stand out from the crowd and emerge victoriously!

The journey of U Mumba from the inaugural season till now

U Mumba is owned by Unilazer sports promoted by Ronnie Screwvala. Currently, Sanjeev Kumar Baliyan is the coach and Upendra Kumar is the deputy coach of the team. The team is currently led by Fazel Atrachali, a defender from Iran. Following is the list of players currently signed by U Mumba:

U Mumba is owned by Unilazer sport promoted by Ronnie Screwvala. Rohinton Soli “Ronnie” Screwvala is an Indian entrepreneur born on 8th September 1956. He is co-founder of Up-Grad. He has also built a sports company by the name U-sports spanning football, esports, and kabaddi. Ronnie has authored a book that goes by the title- Dream with Your Eyes Open. He runs an investment company Unilazer Ventures in which he invests in Indian startups as a significant private equity investor.

Being the awesome team that it is, U Mumba has several records against their name.

U Mumba is one of the most consistent teams in PKL history. They have managed to qualify for every season. There is no doubt that this team holds a good amount of chances to win the Pro Kabaddi League 2021 Champions title!