The SportsLiteSports at just one click!
HomeKabaddiHaryana Steelers - Squad, Owners, History, Records, And Everything You Need To...
KabaddiPro Kabaddi League

Haryana Steelers – Squad, Owners, History, Records, And Everything You Need To Know 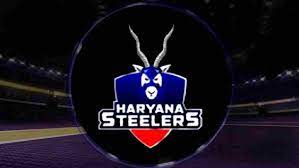 Haryana Steelers is a kabaddi team based in Panchkula, Haryana. It represents Haryana in the Pro Kabaddi League. The team was formed in 2017 and they qualified for the playoffs in their very first season. As we are all decked up for the eighth season of the league let’s get to know more about the team.

The Journey Of Haryana Steelers From The Inaugural Season Till Now

Also Read: List of all Title Winners of Pro Kabaddi League Till Date

Meet The Squad Of Haryana Steelers

Who Is The Owner Of Haryana Steelers Kabaddi Team?

The team is owned by JSW Sports and is a part of the Jindal South West (JSW) Group. JSW Sports is the sports wing of the JSW Group, a $13 billion business with a presence across various countries such as India, the USA, South America, Europe & Africa. Established in 2012, the company aims to play a leading role in creating a sporting culture in India by maximizing the potential of Indian sports and athletes.

These are the top performers of the team in various seasons: