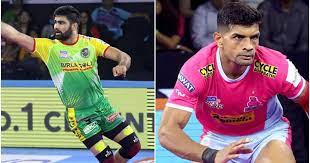 A super 10 is sure not an easy task for any player to achieve in a single match. But beating all odds there are some players who make this task look easy for them and their side. Pro Kabaddi has given many opportunities to many domestic and international players to score at big levels. So here we break down the top five players of all time with the highest super 10’s in pro kabaddi league:

List Of All Time Players With Highest Super 10’s in Pro kabaddi league:

Pawan Kumar Sehrawat is one of those players who have bettered their performances with every editions. Season 6 was his rookie season where he made a return to the Bengaluru side. At instance, he scored 4 super tens out of his five appearance. In the context of super 10’s he finished second after the focus raider Pardeep Narwal of Patna Pirates in the season. Pawan has total number of 31 super 10’s in his 80 appearances.

Deepak is one of the finest product produced by the Pro Kabaddi League . He has been contributing for his respective teams with both tackle and raid points in all season, likewise making him one of the most impact player on mat. Identically he was born in the Chamaria village of Haryana. Coupled with a lot of achievements Deepak is also the 2019 South Asian Games Gold Medalist held in kathmandu. In addition he has scored 31 super 10’s till now with 123 matches.

Maninder has been playing for the Bengal Warriors side and has given some eye catching performances playing in blue jersey. Furthermore he is also the 2017 Kabaddi Asia Cup gold medalist. He lifted the PKL trophy with the Jaipur side in the inaugural season but missed three seasons after that due to injury, Likewise, his career best performance was in the season 6 of PKL with 206 raid points in 22 appearances. At third position Maninder has 33 super raids in 79 matches played.

Initially Starting as a defender Rahul turned into one the most successful name in Kabaddi history. Rahul hails form the Bijnor district of Uttar Pradesh and has been a regular part of Pro Kabaddi League. Standing 6ft tall Rahul is also the 2019 South Asian Games Gold medalist . As a matter of fact, Rahul is also one of the busiest guy on the auction table, In season 7 he was bought by the Telugu Titan for Rs.129 Lacs . With 40 super raids and 122 matches played Rahul is at 2nd podium in our list.

Pardeep is no doubt one of the GOAT of Pro Kabaddi League with him creating new records with every single game. Making his debut in season 2 Pardeep only managed to score 9 raid points in the season. Again , it was just a silence before a thunder after which in season 3 Pardeep emerged as one of the top raiders of the season. In season 7 he crossed the 1000 points tally and is at first position with 59 super 10’s in 107 matches in the list of Highest Super 10’s in pro kabaddi league.

For more such Interesting kabaddi facts do visit : Sportslite