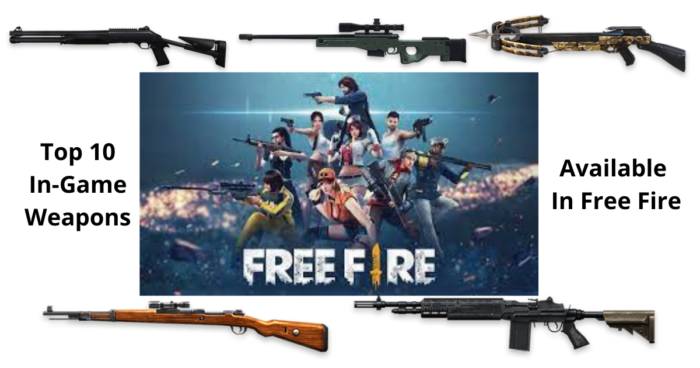 Garena Free-Fire has been growing in popularity in the shadow of games like Fortnite and PUBG. One of the best ways to be the last man standing is to have one of the best guns, or a lot of skill. Let us look forward and know about the weapons available In Free Fire.

This weapon is a mix of a sniper with an assault rifle. However, the slow rate of fire makes its damage per second much less than it looks.

As a weapon, SKS is faster than the M14. It has recoil that is difficult to handle. As a result,  it is still not very suitable for short distances.

The SVD is semi-automatic and has 89 HP damage. It is a more powerful version of the SKS.

The Crossbow and other 40mm projectile weapons also do 90 damage after the latest updates.

The weapon is one of the most powerful snipers in the game. However, the reload time is a big issue and the player needs to be smart while using it.

Even though it is a very powerful sniper, with each shot, it is necessary to remove the eye from the sight to use the bolt and reload.

It is a darling weapon for close-range players. As a result, M1014 is the deadliest shotgun.

Another weapon, SPAS 12 is used for close combat. For instance, it is the second weapon with the most damage from Free Fire. It is one of the best weapons available In Free Fire

It is a handheld cannon. The M1887 is the shotgun that was one of the latest to be added to Free Fire. Above all, the distance attribute makes it even more effective.

Also Read- How To Download Free Fire On A Computer

PRO TIP: Watch streamers on YouTube or Twitch. It will help you learn tactics that they have learned through lots of gameplay experiences. You’ll even find a lot of playthroughs that you can follow to up your game.