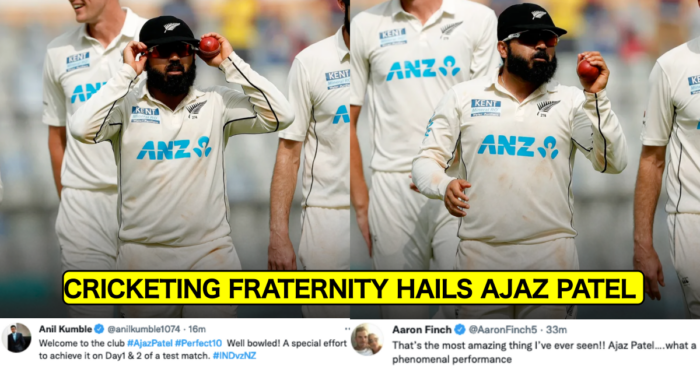 After having bagged each of four Indian wickets to fall on the first day of the Mumbai Test, Ajaz Patel extended his brilliance on Day 2, and cast his spell of magic to cast the remaining six and finish with a perfect 10. He became only the third bowler to achieve the milestone. This is after England’s Jim Laker and India’s Anil Kumble against Pakistan in Delhi in 1999. Twitter Explodes As Indian Born Ajaz Patel Took 10 Wickets.

Ajaz Patel achieved a special milestone, when he bagged all 10 wickets in the first innings. He achieved this milestone in the ongoing second India-New Zealand Test in Mumbai. The left-arm spinner returned 10/119. He joined legendary yesteryear spinners, England’s Jim Laker and India’s Anil Kumble, in achieving the feat. India were bundled out for 325 runs in their first innings with Ajaz ending with magical figures of 10/115. It all started with Shubman Gill edging one to the slips in the first session on the first day. In his very next over, Ajaz Patel sent back Cheteshwar Pujara and Virat Kohli for ducks. Shreyas Iyer then hit bat and pad before lobbing up to the wicketkeeper.

Not many would’ve even thought of Ajaz Patel creating this record but as the second session on Day 2 got underway, it began to look realistic. He dismissed Wriddhiman Saha and Ravi Ashwin off consecutive deliveries in the morning session before getting Mayank Agarwal who was threatening to take the game away from New Zealand. The opening batter scored 150 but couldn’t avoid getting out to Ajaz.

Once Mayank got out, it was a cake walk for the left-arm spinner who was interestingly playing at his home ground. He dismissed Axar Patel, Mohammed Siraj and Jayant Yadav in quick succession to create a rare record. He also became the first ever bowler to achieve the feat away from home. Laker and Kumble both did it during their home season.