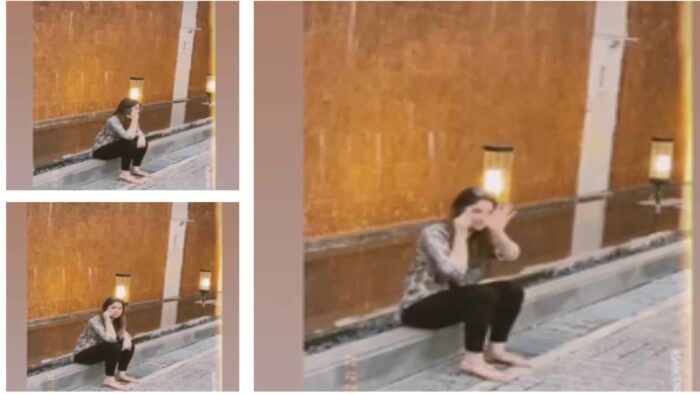 In a recent development, Master Blaster Sachin Tendulkar’s daughter Sara Tendulkar committed a big offence publicly. Yes, indeed you read that correctly. Sara Tendulkar was spotted sitting in public. While she sat on the walkway nearby her friend artist Siddharth Kerkar shot her on camera and amusingly said that it is offensive. However, Sara, notably has created her own audience, as a content creator and model, coming out her father’s shadow.

Glamorous Girl Sara Tendulkar keeps hitting the headlines very often these days. Most recently, the news of her breakup with star Indian batter Shubman Gill surfaced the internet. However, they never accepted their relationship publicly. Meanwhile, these days she is enjoying her leisure time in Goa with her friends. She is reportedly attending her friend’s marriage there. Sara shares her charismatic pictures almost every other day. On her Instagram story, she recently reshared her friend Siddharth Kerkar’s story, where he was spotted shooting around a beautiful villa. He said,

Hello everyone, I’m at this stunning property. I don’t know people can do this but you know sitting in public is an offence and people just don’t get it. And we have a while Sara here doing just that. (Laughs)

Sara was busy talking on phone while Siddharth Kerkar was shooting her. As Siddharth beckons to Sara, she smiles and waves at the camera.

Sara Tendulkar was of lately seen at the live concert of Canadian-Punjabi Singer and Rapper AP Dhillon. The concert was organised at the famous Grand Hyatt Hotel in Mumbai. Notably, the Brown Munde trio is organizing live concerts in various cities under their Takeover Tour. Bounteous videos of Sara Tendulkar enjoying the concert are doing rounds on various social media platforms. She was snapped by the Paparazzi outside the Grand Hyatt Hotel with Javed Jaaferi’s daughter Alaviaa Jaaferi. Sara herself shared the videos of the concert on her Instagram account’s story.

Sara was also spotted by the Paparazzi while she was leaving for Goa a few days back.