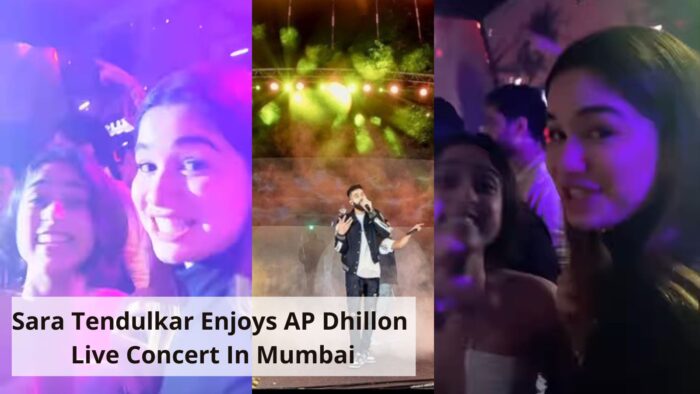 Sara Tendulkar, daughter of former Indian legendary batsman Sachin Tendulkar, was spotted last night spotted at the live concert of Canadian-Punjabi Singer and Rapper AP Dhillon. AP Dhillon was assisted by Gurinder Gill and Shinda Khalon. The concert was organised at the famous Grand Hyatt Hotel in Mumbai. Notably, the Brown Munde trio is organizing live concerts in various cities under their Takeover Tour. Bounteous videos of Sara Tendulkar enjoying the concert are doning rounds on various social media platforms. Sara was snapped by the Paparazzi outside the the Grand Hyatt Hotel with Javed Jaaferi’s daughter Alaviaa Jaaferi. Sara Tendulkar herself shared the videos of the concert on her Instagram account’s story.

Many notable names among audiences

Many star kids arrived as audience in Brown Munde fame AP Dhillon’s live concert. These include the names of popular actresses Jhanvi Kapoor, Sara Ali Khan, her brother Ibrahim Ali Khan and Sara Tendulkar. Apart from these popular star kids, many celebrities also attended live concert. Famous singer and rapper AP Dhillon had a banging live concert in Mumbai, which was also attended by many star kids of Bollywood. A day after the concert, the police have registered an FIR against the organizers for alleged violation of the COVID-19 norms.

On work front, Sara Tendulkar has recently made her modelling debut for a clothing brand with a commercial which also features Bantia Sandhu and Tania Shroff.

According to the informations available, the government, police and BMC officials were not informed about such a big live concert in Mumbai. They were not even aware that a live concert was being organized in the midst of the increasing threat of Corona and such a massive public gathering was involved. Mumbai’s Vakola Police has registered an FIR under sections 188, 269 of IPC. The police have registered an FIR against the organizers for flouting the Covid protocols. The live event was organized at Kalina Santa Cruz’s Five Star Hotel.

The cases of Omicron variant are spreading exponentially in the country as a result the fear is growing among people. At the same time, in view of the threat of Omicron, the Mumbai Police has banned any procession, rally and public gatherings in the city. Notably, the Maharashtra government has become very careful to break the infection chain of Omicron. And consequently instructions have been given to take special precautions regarding precautionary rallies and overcrowding. Section 144 has been imposed in Mumbai to stop gatherings and rallies for two days.