The SportsLiteSports at just one click!
HomeCricketAshes 2021: Australia VS England 1st Test: Who won MOM in AUS...
CricketPlayer 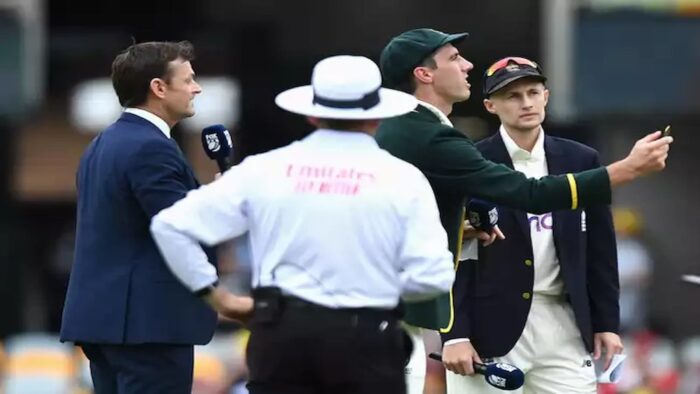 And Australia dominated once again on England in the Ashes 1st Test. Australia won 1st Test Match by 9 wickets and go 1-0 up in the series. Australian players outplayed their England counterparts in every department. Australia have a mere target of 20 runs to chase in the second innings. This test has not gone in the favor of England in any way. They have been also docked 5 WTC points for slow over rate. Also, they are fined for the 100% of their match fees. Australia have very much positives going into the second Test which is a Day-Night Test Match. We will also see who won MOM in AUS vs ENG 1st Test.

Who won MOM in AUS vs ENG 1st Test Match?

Travis Head, for his brilliant and counter attacking cricket, was adjudged as the Man of the Match in Ashes 1st Test. He scored 152 runs in just 148 balls. The most impressing part of his innings was his counter attacking approach. He scored his century in just 85 balls. He came at a time when Australia was in pressure after losing consecutive wickets. Head was making his comeback to Test Cricket. Many people criticized the Australian management for choosing him against Usman Khawaja. But he repaid the trust of the selectors with his brilliant innings.

After winning the toss, England captain Joe Root decided to bat first. This was a shocking decision as England were not in a very good form in their batting and the conditions were also suitable for bowling at the start of the play. And England crumbled in the first innings of the 1st Test match. Mitchell Starc took the wicket of Rory Burns on the first ball of the Ashes. No top order batsman was able to set at the crease and score runs against the quality Australian bowling line up. England were bowled out for just 147 runs in the first innings. For Australia, Pat Cummins was the key bowler. He took a fifer in his captaincy debut Test Match.

In reply, Australia lost their opener Marcus Harris early. But the way David Warner and Marnus Labuschagne played was just incredible. They played attacking cricket and keep the run scoring on. David Warner missed his century by just 6 runs. But when these two batsmen got out, Travis Head took the charge. He played counter attacking cricket. He took charge against England spinner Jack Leach and didn’t let him settle. Jack Leach accounted for 102 runs in 13 overs at an economy of 7.80. And with the brilliant team effort, Australia managed to score 425 runs and pile up a huge lead on England.

After coming to score with a huge lead on the shoulders, Australain opener Rory Burns once again departed after scoring just 13 runs. Haseeb Hameed also got start once again, but he was not able to capitalize on it. But the fightback showed by David Malan and Joe Root was just exceptional. But these 2 batters got out in the first half hour of the Day 4 of the 1st Test. And then England batting can’t able to revive. England was able to score 297 runs with the loss of their 10 wickets.

Australia just have to chase 20 runs in the last innings on the fourth day. The only bad news for Australia was that their opener David Warner was injured and he didn’t came to bat in the second innings. But that didn’t trouble the host with such a small total. Australia chase down the target in just 5 overs. Australia go 1-0 up in the series. Nathon Lyon also completed his 400 Test wickets in this match. He has joined the elite list of 400+ Test wickets.

Also Read: Romantic: Twitter Explodes As One Fan Proposes To His Girlfriend During Ashes Test

And England have to answer a lot of questions ahead of the second Test match in Adelaide. Their openers are not performing well. Their lone spinner Jack Leach went very expensive in his first outing. The whole of England team is dependent on Joe Root.