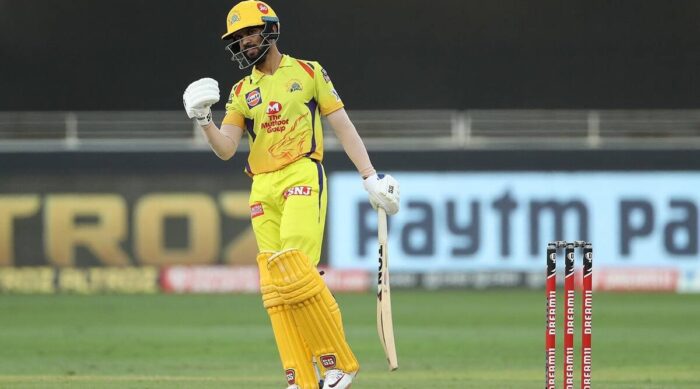 With the IPL 2021 just about to end with the final match currently going on, the race to Orange cap ends. The orange cap is given to those cricketers who have the most runs in an IPL season. This season Orange Cap is like a hopping frog that just hops from player to player each match and even within the same match. Let’s read Who Won The Orange Cap In IPL 2021?

Finally, Ruturaj Gaikwad wins this and becomes the youngest player to win an Orange cap. Faf Du Plessis, Ruturaj’s opening partner in CSK was just 2 runs behind Ruturaj. Ruturaj scored 635 runs in 16 matches with a century also to his name this season. He scored an unbeaten 101* against Rajasthan Royals. He averages more than 45, which is just unbelievable.

Before the start of today’s final match, the orange cap holder was KL Rahul who scored highest in 13 innings and Ruturaj overtakes him in his 16th inning … interesting.. No? Maybe if Punjab Kings were qualified, the Orange cap may finally rest on KL Rahul in the 2021 IPL season. But being in reality, Ruturaj scored a knock of 32 runs today which made him the Orange cap holder this season.

Also Read: Top Five Players With The Most Sixes In A T20I Inning

Apart from his century, he also plays some handy innings and always gives a good start to his team. In 2020, where he played some matches only, his strike rate was an issue. His strike was not up to the mark of T20 cricket. But in this season, he shut down all mouths of his critics, with most runs in 2021 IPL and also with a strike rate of more than 135 which is just incredible.

He also made his Indian Debut in the recently concluded series against Sri Lanka but didn’t get much opportunity there. He only played in 2 innings and scored 35 runs. It is sure that he is the future star of Indian Cricket with a lot of shots he has.

Also Read: Top International Teams With Most Sixes In T20