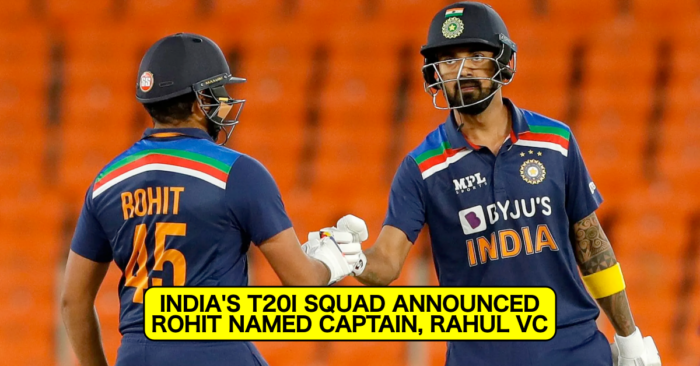 The Board of Control for Cricket in India (BCCI) announced the squad for the Indian team’s upcoming T20I series against New Zealand. As expected, senior batsman, Rohit Sharma will captain the side while his opening partner, KL Rahul, will be his deputy. We will analyze the India squad for New Zealand T20Is.

After the conclusion of India’s campaign at the T20 World Cup, the BCCI didn’t waste any time in announcing the squad for the home series. There will be three T20Is and two Tests, for which the squad will be announced in the coming future.

There were no real surprises in the squad. Impressive IPL 2021 performers, Ruturaj Gaikwad, Venkatesh Iyer, Harshal Patel, and Avesh Khan have all been named in a refreshed 16-man India T20I squad that will take on New Zealand in a three-match series starting on November 17.

Shreyas Iyer added to main squad. He was in the reserves in T20 World Cup 2021. The two keepers will be the explosive duo of Rishabh Pant and Ishan Kishan. Suryakumar Yadav was the last batsman who will round up the squad.

Notable absentees in the squad include multi-format regulars Virat Kohli, Jasprit Bumrah, Mohammed Shami and Ravindra Jadeja, while Hardik Pandya, who has had issues with his bowling fitness, has also not been picked. Shardul Thakur, Varun Chakravarthy and Rahul Chahar, who were part of the 15-member T20 World Cup squad, are the others to miss out. Notably, Virat Kohli, Ravindra Jadeja, and Jasprit Bumrah have been rested. The trio have been in bio-bubbles for a long while and they needed a break from the fatigue. Meanwhile, they will likely return for the Test series which will be part of the WTC 2021-23 cycle.

In the bowling department, Yuzvendra Chahal, who was left out of the T20 World Cup squad, makes a comeback to the team. Avesh Khan and Harshal Patel also received their first national call-up. Axar Patel and Ravichandran Ashwin are the two spinners in the team apart from Chahal. Though, Ashwin did excellently in the opportunities he got in the T20 World Cup. For his brilliant performance, he has been rewarded.

Among those picked for their IPL 2021 cred, orange-cap winner Gaikwad played two T20Is for India on the tour of Sri Lanka earlier this year. Avesh, Venkatesh and Harshal, meanwhile, were part of the India bubble at the World Cup and helped assist the team in its preparations

The squad for the two subsequent Tests, at Kanpur (November 25-29) and Mumbai (December 3-7), will be announced later.