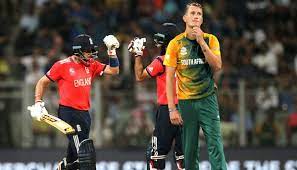 The common thesis in cricket is that the chances of you winning a match increase with the more runs your score. It’s common knowledge. In the vast number of matches played over the years in the T20 World Cup, we’ve seen plentiful gigantic totals. However, none of them surpass the ones mentioned below. That being said, here is a list of the top five highest team totals in the T20 World Cup.

Starting off the list at number 5 we have South Africa. The Proteas went head-to-head against Scotland in the second edition of the T20 World Cup. Although most of us weren’t expecting a thriller, to begin with, we did not anticipate the level of domination by South Africa. AB de Villiers‘ baffling knock of 79* off just 34 deliveries was the highlight reel of the match. South Africa posted a record 211-runs in that match and bowled out their Scottish challengers for just 81 runs. Winning the match by a landslide of 130 runs in the process.

The game which made an entire country fall in love with T20s was headlined by Gambhir (58) and Sehwag (68). The duo opened India’s innings against England and put a record-opening partnership. The Delhi boys put together an impressive 136-run partnership, which still holds as the highest opening partnership for India to this very day. They set the stage for one of the greatest cameos in cricket history that came courtesy of Yuvraj Singh. In the most infamous over in cricket history, Yuvi (58* off 16) hit Broad for 6 sixes in an over and reached his fifty in prime fashion. India posted a record of 218 runs and won the match by 18 runs.

The 18th match of the 2016 WT20 gave us cricket fans a match to cherish for the ages. Batting first, South Africa was given a flying start by openers Amla (58) and de Kock (52). Adding 96 in just 7 overs, the Amla-de Kock connection put on a show for the Wankhede crowd. In addition, South Africa’s veteran finishers Jean-Paul Duminy and David Miller gave the Proteas the perfect end to their innings. Adding a whopping 60 runs in the last 27 balls, the left-handers helped SA post the second-highest total in WT20 history. Little did they know that we were about to witness something truly magical.

While the chances of them emerging victorious were slim, England was not going to leave without putting up a fight. Chasing the humongous 230-run target set by the Proteas, England was determined to win the match. Jason Roy (43 off 16) gave England a blistering start while wickets kept falling at regular intervals. In one of the finest T20 innings of his career, Joe Root struck 83 runs off just 44 deliveries. His special efforts made England come out on top after a scintillating game.

The seventh match of the inaugural WT20 saw Sri Lanka post an overwhelming 260-run total in their 20 overs against Kenya. Known for giving fiery starts, Jayasuriya (88) helped Sri Lanka cross the 100-run mark before the 10th over. Mahela Jayawardene’s 27 ball 65 thump added more leverage to the Sri Lankan innings. However, it was Jehan Mubarak’s blitzkrieg cameo that put Sri Lanka on the top spot. Scoring 43 off just 13, the left-hander helped Sri Lanka post a barbaric total of 260/6. Sri Lanka won that diversion by an enormous edge of 172 runs.