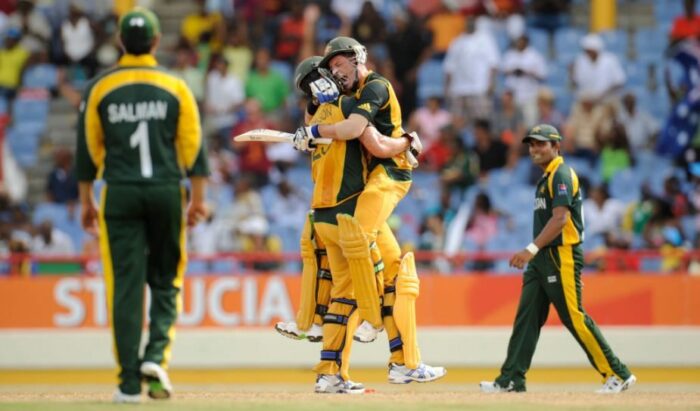 There’s a popular saying in cricket, “The match is not over until the final ball is bowled.” Quite a wonderful saying to live by isn’t it? A saying that puts to light the never-give-up mindset one must have when their backs are up against the wall. It’s that last bit of offense you have left inside of you despite being rag-dolled by your opponent for instance. Over the years, we’ve seen some of the most incredible instances of such an uprising in the world of cricket. This article compiles some interesting cases of such last hurrahs from teams in jeopardizing predicaments. Where heroes were born fighting tooth and nail whilst giving their best for their country at the need of the hour. Above all, here is a list of the top five highest 8th wicket partnerships in the T20 World Cup.

After being vastly overpowered by Australia’s relentless pace attack, Jehan Mubarak and Chaminda Vaas showed some signs of life for Sri Lanka. While the Lankan Lions were struggling at 43-7, the Mubarak-Vaas duo batted with great resilience and added 40 runs for the 8th wicket. However, this last flurry of offence was too little too late for Sri Lanka’s cause as they were restricted for a total of 101 as the Kangaroos chased it down with relative ease.

Chasing 185 and being reduced to 50/7 against Australia, India needed something special to take them out of the predicament. A young Rohit Sharma alongside Harbhajan Singh tried to steady the sinking ship and fetch the Men-in-Blue out of adversity. They added a solid 47 runs before Harbhajan was dismissed for 13. Rohit went on to score a solid 79* but India was bowled out for a mere 135. Despite ending up on the loser’s side, Rohit’s gritty innings showed a glimpse of his greatness which was destined to arrive ahead of him.

In a low-scoring thriller that saw the Umars take Pakistan home in an innings of great bravado. Gul’s hard-hitting cameo of 32 off 17 along with a matured innings from Umar Akmal (43*) helped Pakistan turn the tide of the game. The duo added 49 runs against the Proteas as a result of which Pakistan beat South Africa in a barn-burner of a contest.

Chasing 170 against Sri Lanka in their home turf is often deemed a Herculean task. You’re written off the game if you’re reduced to 93-7 in 14 overs with almost no chances of any comeupance. Samit Patel and veteran spinner Graeme Swann’s partnership came as a breath of fresh air for the English innings. The pair added an impressive 51 runs while the latter being the aggressor. Samit Patel’s commanding innings (68) gave England a ray of hope before he was dismissed by Lasith Malinga. England only managed to score 150 odd runs and fell short by 19 runs despite their heroic comeback. Sri Lanka may have won the game but England’s brave showcase won our hearts.

\Arguably one of the most miraculous cases of uprising features Mr. Cricket himself, Mike Hussey. Being stuck at 144-7 in 17.1 overs while chasing 197, Australia looked destined to lose against defending champions Pakistan. The Pakistanis had their tails up with excitement as one could sense the morale of the camp rising. Mike Hussey, on the other hand, (60* off 24 balls), had other ideas. Hussey batted with all his might as Johnson supported him throughout. It all went down to the final over where Australia needed 18 runs. A trifecta of sixes along with a boundary sealed the deal for the Aussies as a result of which Hussey punched the air with delight. In addition, Australia qualified for their first and to date only finals of the T20 World Cup and it took some serious heavy lifting from Huss.