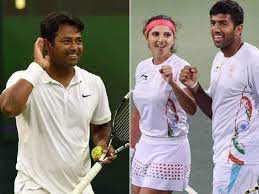 Tennis has been a popular sports in India since the British age . No doubt India has produced most finest tennis players which have outshined all over the world. Furthermore , India has been regarded as the most successful Asian team at the Davis cup with finishing 3 times as runner ups. The list of Indian records just goes and goes so here is a list of All Grand Slam Winners From India :

Indeed , the most successful tennis star of India registers his name as Leander Adrian Paes . Not only in singles but also in doubles he is regarded one of the best player worldwide. With entering the 1996 Olympics as a wild card entry Paes just shocked every tennis fan. After beating Fernando Milegeni he became only the second Indian to win an individual bronze medal at Olympics. In the same year he was acknowledged with the highest sporting honor Major Dhyan Chand Khel Ratna. The year 1999 was a big turnout for his doubles career when he along with his partner Mahesh Bhupathi entered 4 Grand Slam finals winning two out of them. For instance the 14 Grand time Grand Slam holder was also named Male MVP for 2009 and 2011 for all of World Team Tennis

With 4 slams in doubles and 8 in mixed doubles category Bhupathi is regarded in top double players of 1990-2000 era. Mahesh reached at the peak of ranking ( No.1) along with his partner Leander Paes after a very successful year between 1999-2000. Consequently, In 2006 he paired with Martina Hingis for the Australian Open ,entering as wild card the pair defeated the top seeded player and won the Grand Slam Title and with this win he completed his career Grand Slam in mixed doubles. In addition his highest single’s career ranking is 217.

Daughter of one of the known sports journalist Imran Mirza and former No.1 Sania mirza. The 6 time Grand Slam title winner also finished 4th along with Rohan Bopanna at the 2016 Olympics. Also announced UN Women Goodwill Ambassador for South Asia Sania has been the inspiration to many young girls in India and all over the world. In 2006 she was listed as among Top 100 most influential people of the world. In 2010 she married to the famous Pakistani cricketer Shoaib Malik and have a baby boy named Izhaam Mirza Malik. She made a terrific comeback after her two year maternity break and again entered Top 100 ranking just in a spam of a time. Sania has proven that nothing could stop a women and aims to higher rankings further season.

In 2010 Rohan came close to his first Grand Slam Title when he paired with Aisam Qureshi of Pakistan . The pair upset some top seeds but lost in the final and settled as runners up. Bopanna came in the light when he won the 2017 French Open mixed doubles alongside Gabriela Dabrowski of Canada. In addition he has finished 4th along with Sania Mirza at the 2016 Rio Olympics. He reached his highest career ranking No.3 on 22 July 2013 and is currently ranked world no.42 (18 October 2021).