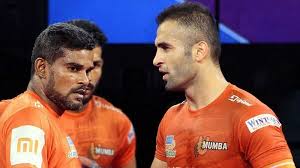 A solid defense gives team a balance and a reliable position. No doubt PKL has been one of the main reason for India’s successful performances at the international stages. Also, With many young talents making there way to league the new season of PKL has some promising future stars. So here we conclude top five best defenders In Pro Kabaddi League 2021:

Playing for the Puneri Paltan side last year Surjeet is going to appear in the Tamil squad this year. The 2016 season league winner also holds Gold at 2017 Southeast Asian Games and Gold at 2017 Asian Beach Games. Coming from the Sonipat district , Surjeet finished with most high five’s in season 5 and is all set for season 8.

After two continuous season with the Telugu Titan side Vishal is ready to make it in the new jersey for the Puneri Paltan side. The ankle hold specialist captained the Telugu side just at the age of 21 after a breakthrough season 5. With 62 tackle points in season 7 , He will be aiming to finish in Top 3 defenders this season.

With such an impressive debut in season 7 , Sumit eye’s on the his second consecutive season with U.P Yodha. Moreover Sumit secured 7 high5’s in his inaugural season with 53.19% tackle strike rate. The left corner earned a total of 80 points with included 3 raid points and is focusing to change his podium standing from second to first this season.

Nitesh will be again seen in the U.P Yodha side along with the left corner Sumit after being retained for second time. The best defender award for PKL season VI is having time of his life with two consecutive show stealing seasons. In season 6 he also created history after becoming the first defender to score a century of tackle points in a single PKL season. Standing 5’8 inch Kumar will be stepping for his third in a row successful season.

One of the most consistent and dominant defender in PKL history stands with the name Fazel Atrachali. Not only once but twice he has won the best defender of the season award . Furthermore, the Iranian enjoyed two consecutive 80 plus tackling point season in the 6th and 7th edition namely. Asian Games Gold (2018) Medalist and Kabaddi World Cup Silver Medalist would be focusing to continue his legacy in this season too.