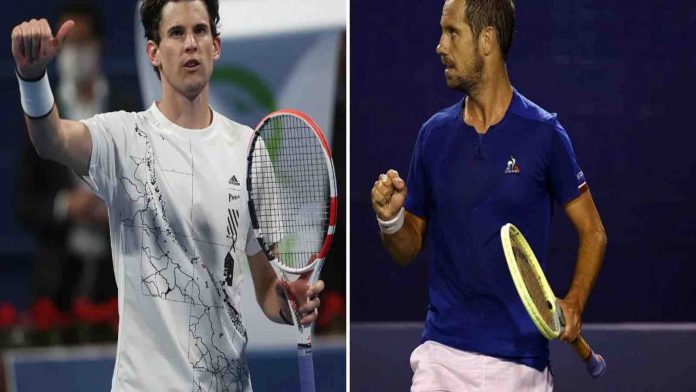 In the opening round of the 2022 Moselle Open, Dominic Thiem will square off against Richard Gasquet.

Late in March of this year, Thiem made a comeback after an injury layoff. His comeback, however, didn’t go well, as he was eliminated in the first round of each of the seven events he entered. He played in a Challenger tournament after leaving the French Open, when he finally won a match but lost in the second round. He made the decision to forego Wimbledon in favour of a few clay-court competitions following the conclusion of the grass-court Major. He did well in them, making it to the semifinals in Gstaad and the quarterfinals in Bastad and Kitzbuhel. With his participation in the Rennes Challenger final, the 29-year-old has already achieved his greatest performance of the year.

The seasoned Richard Gasquet continues to challenge youthful players on the ATP tour. His finest performance so far this year was reaching the semifinals of the Geneva Open, when he defeated Daniil Medvedev. Additionally, Gasquet has advanced to the quarterfinals of four separate competitions this year. He dropped out of the Australian Open and French Open in the second round, but advanced to the third round of Wimbledon and the US Open. A recent matchup in the final Grand Slam of the year saw the 36-year-old lose to Rafael Nadal for the 18th time. In 2004, Gasquet made it all the way to the Moselle Open final and lost there.

Gasquet leads Thiem 2-1 in the head-to-head. The Austrian won their previous encounter at the 2019 China Open in straight sets.

The best player to gauge Thiem’s current skill level is Gasquet. The Frenchman’s flexibility on the floor will make life difficult for his younger rival. The 36-year-old has a chance of winning if he can control his occasionally wayward forehand. Both teams have a chance to win in this game. Expect Thiem to amp up his game at vital times to secure the victory because he will be keen to maintain the momentum he has established.

Prediction: Thiem to win in 3 sets