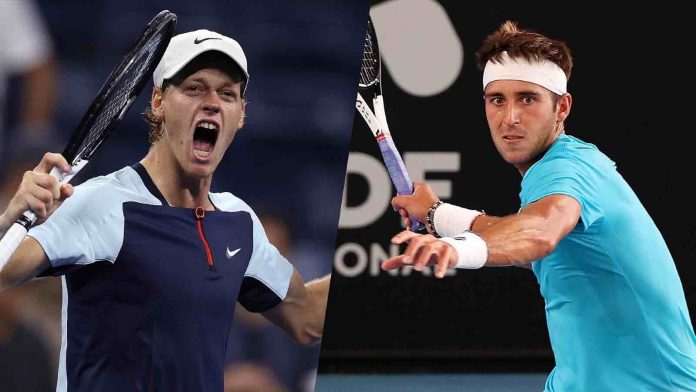 The second round of the 2023 Australian Open will begin on Wednesday with the 15th seed Jannik Sinner against the 79th-ranked Tomas Martin Etcheverry.

In the opening round, Sinner faced Kyle Edmund. In the ninth game, he had a set point on his opponent’s serve, but the British player fought back and maintained serve. But the Italian went on to win the set by serving it out in the subsequent game. Sinner delivered a bagel to further widen his lead during the second set, which was rather one-sided. He continued to gain ground in the third set, sprinting to a 4-0 advantage. By winning the following two games, Edmund showed some indications of a comeback. To increase his lead to 5-2, the Italian broke his opponent’s serve once again. Before winning 6-4, 6-0, 6-2, Sinner had to save a few break points as well as five match points.

In the first set, Etcheverry took an early break to go up 3-1 and then held onto the advantage to win it in the end. To tie the match, his opponent won the second set in a comeback. At the start of the third set, Etcheverry required five break points to finally break Barrere’s serve. For the remainder of the set, he maintained his lead and ultimately prevailed. Early on in the fourth set, the pair exchanged service breaks, but otherwise they were evenly matched. Etcheverry won the match 6-3, 3-6, 6-4, 6-4 after obtaining the crucial break in the ninth game to move 5-4 ahead. His triumph marked his first at the Grand Slam level.

In order to defeat Sinner, Etcheverry will need to significantly enhance his game. This should be a reasonably straightforward matchup for the latter. Due to his lack of ATP experience, the Argentine will have a difficult time competing against players who are rated higher. The young Italian should successfully advance to the following round.