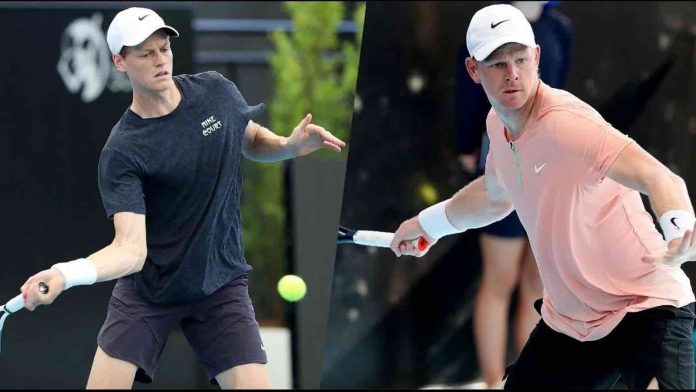 Jannik Sinner, the 15th seed, will play Kyle Edmund on Monday in the opening round of the Australian Open.

After the Italian displayed his great potential in 2022, there will be high expectations for Sinner to succeed this year. In 63 games, he won 47 of them, including a title-winning run in the Umag Open. He lost in the quarterfinals of the Adelaide International 1 before competing in the Australian Open. The World No. 16 prevailed over players like Thanasi Kokkinakis and Kyle Edmund in the first two rounds but was unable to hold off Sebastian Korda in the round of eight.

In contrast, Kyle Edmund will be attending the Australian Open for the first time in three years. He missed the entire 21-month men’s tour (starting in October 2020) due to a left knee ailment that required three surgery. The British player returned to the 2022 Winnipeg Challenger in July and has won five of his last ten games. After being eliminated early from the Adelaide International 1 and Adelaide International 2, he will enter the Australian Open.

Edmund trails Sinner 1-0 in their head-to-head matchup. He most recently defeated the Brit in straight sets, 6-3, 6-2, in the Adelaide international 1 in 2023.

The Italian possesses one of the best tennis ball timing skills in the world and a keen feel of where he should be standing on the court. He is able to consistently apply pressure to his opponents throughout matches thanks to his composed temperament and adept shot-making abilities. On the other side, Edmund will be content to gain some much-needed game experience. The British player needs more court time in order to face opponents at the highest level because he hasn’t yet found his peak form. Sinner will compete against a seasoned athlete who has previously won two ATP hardcourt tournaments. The Italian, who is currently performing at a far higher level, should be able to outwit his opponent in this first-round match.

Prediction: Sinner to win in 4