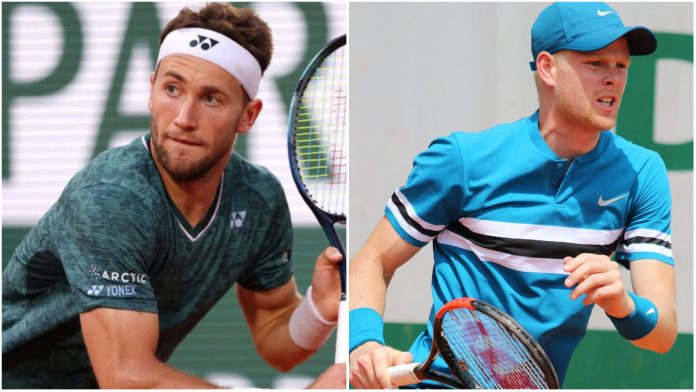 The 5th-seed Casper Ruud will commence his U.S Open 2022 campaign by playing against Kyle Edmund in the first round. The French Open runner-up could be a big obstacle for many competitors in the tournament. Let us check, Casper Ruud vs Kyle Edmund Prediction, Head-to-Head, Preview, Betting Tips and Live Stream- US Open 2022.

Casper Ruud has won nine ATP Tour singles titles out of which he recently achieved the Swiss Open title defeating M. Berrettinni. Ruud could not compete in the Australian Open earlier this year, however, he glimpsed his abilities in the Roland Garros, reaching into his first ever major finals. By doing this, he became the first Norwegian to reach into any Grand Slam final in tennis history. The 23-year-old had a bombastic first quarter of the year followed by null grass court titles. His strength is clay court still he managed to improve himself on the hard court. Casper lost the semis to Hubert by 7-5, 3-6, 2-6 in the Canadian Open followed by an early unexpected defeat from B. Shelton (3-6, 3-6).

The British, Kyle Edmund played all three (Challengers, ITF and ATP) past two months however with not such impressive results. The 27-year-old returned from a more than a two-year gap in professional tennis through Wimbledon this year. Kyle competed along with his native partner O. Nicolls in the mixed doubles and reached the second round. He lost in the round of 32 against fellow countryman, Daniel Evans in the Citi Open. Four days back Edmund lost the round of 32 to B. Bonzi (4-6, 6-7).

These two will compete against each other for the very first time on Monday, 29 August.

It will be a straightforward competition between Ruud and Edmund. Casper Ruud is the 5th-seed, also ranks as World No 7 and has much scope to defeat Edmund. On the other hand, it will be extremely tough for the 27-year-old to hold back him as he will be playing after a long time. Ultimately, this match can be cut short within an hour, still depends on the level of competition from Kyle.