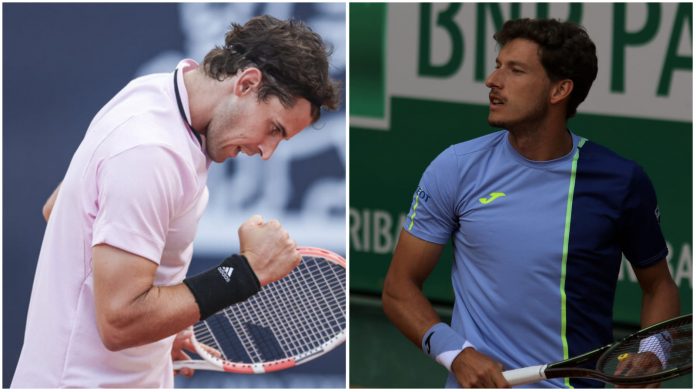 Dominic Thiem is yet to wholly come back to his form, still the 28-year-old is fighting hard against a few higher-ranked players than him. The early couple of months were not very appreciatable as he lost the first rounds at Challenger Marbella. Followed by Serbia Open against J. Millman in hopeful three sets, Estoril Open against Bonzi with a neck-to-neck second set tiebreak. Also, Thiem lost Madrid Open to Murray (3-6, 4-6), the Italian Open to Fabio Fognini (4-6, 6-7) and the Geneva Open too. Thiem faced yet another early loss in the French Open with a three-set clean sweep from H. Dellien. Ultimately, he started to win matches in July including defeating top players (top 20).

Pablo Carreño Busta of Spain earlier entered the finals of the Barcelona Open which he lost against his countryman, Alcaraz. Followed by that loss, Busta could not get back on his feet for almost a week. However, he reloaded his performance in the Halle Open where he reached the quarter-final but lost against Nick Kyrgios. Pablo also advanced to the semi-final of the Swedish Open defeating Schwartzman in the quarters. Ultimately won his first ATP 1000 trophy defeating the 8th-seed Hubert Hurkacz.

Thiem dominates the winning streaks against the Spaniards. Dominic has defeated Busta for straight five years (2015-2019), however, they have not met since the 2019 Vienna Open. They both clashed twice in the quarter-finals and once in the finals of Rio where Thiem defeated Pablo in straight sets.

Even though Thiem has dominated Busta in history, however, it will not be as smooth as early. Pablo Busta can be very defensive and same time surprisingly attacking which may be a hurdle for the one-handed backhander. Busta has showcased recently his quality defense and coverage of court against Hubert. These factors can be crucial for Thiem to look upon to pass over the first round.