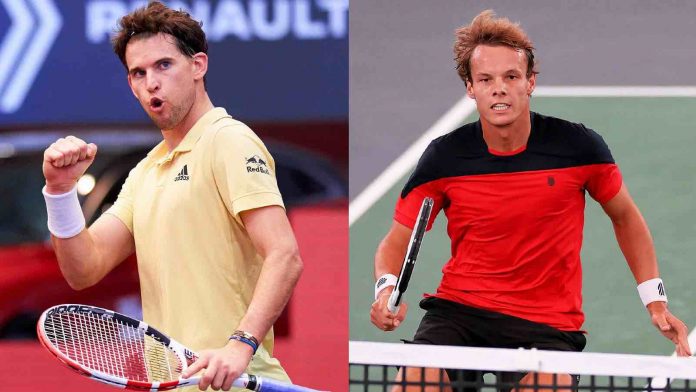 On Monday, Dominic Thiem will compete in the opening round of the European Open against local wildcard Michael Geerts.

After being sidelined for several months owing to a wrist injury, Thiem made a comeback during the clay court season. Before turning things around in the Nordea Open in Sweden, he went on a losing streak. This season, the Austrian has already advanced to two semifinals, most recently at the Gijon Open. He defeated Joao Sousa 6-2, 6-0 to start the competition, and then he defeated Marcos Giron 3-6, 6-4, 6-0 to complete the sweep. He subsequently defeated fourth-seeded Francisco Cerundolo in the quarterfinals, 6-4, 6-3, to advance to a semifinal match with Andrey Rublev. Rublev defeated the Austrian, 6-4, 6-4, to secure his spot in the championship match.

267 in the world This season, Michael Geerts has primarily competed on the ATP Challenger tour and the ITF circuit. His single match was against Richard Gasquet during Belgium’s Davis Cup Finals match versus France. The French won the match 2-1 as the 36-year-old defeated him 6-3, 6-3. Belgium placed bottom in their group after losing to Germany and Australia in the past. Geerts’ season-opening ATP Tour contest will take place at the European Open.

This will be their first encounter so the head-to-head stands at 0-0.

In his previous outings, Geerts’ serve frequently resulted in aces. It will be put to the test, though, because Thiem possesses a strong return game. If the Belgian wants to have any chance against the winner of the 2020 US Open, he must perform at his very best. Thiem appears to be in good shape and should have no issue overcoming Geerts to advance to the next round.