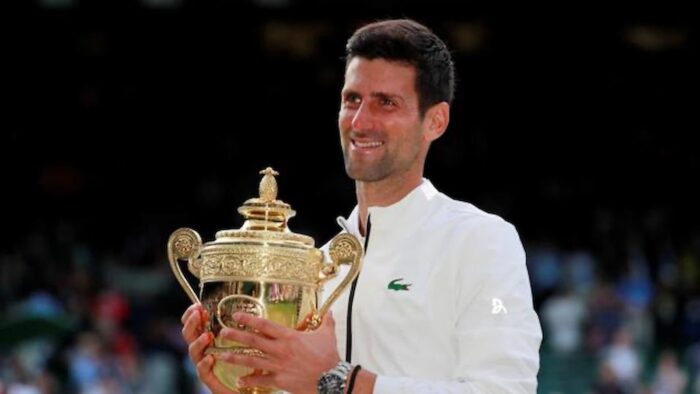 Novak Djokovic is a Serbian tennis player. Regarded undoubtedly as one of the GOATs of tennis, he has a plethora of records to his name. He has won 20 grand slams. A record he shares with Swiss legend Roger Federer. He also holds the record for most weeks as world number with 358 and counting. Novak is the first man after Rod Laver to win each slam twice. Moreover, he is the first man to win all 9 Masters 1000 titles. His reign of dominance beginning in the year 2011 is unlike anything ever seen in the sport. On this note, we shall look at 10 unknown facts about Novak Djokovic.

He first picked up a racket at the age of 4 and would watch people play on his daily visits to a tennis camp. The camp was conducted former tennis player, Jelena Gencic who also spotted his talent and groomed him into the player he is today.

Not many people know that Djokovic contemplated retirement after his quarterfinal loss at Roland Garros in 2010. The loss came after a hard fought 5 set match against a low ranked player. This made Novak ponder over his future in tennis.

Djokovic does not consume dairy, gluten, red meat in addition to refined sugar. He is vegan and eats a plant based diet. He credits this diet for revamping his fitness and making him the player he is today.

Novak is impressively multi-lingual. He can speak 11 languages fluently including his native language Serbian and English. Some of the languages he speaks are Arabic, Chinese, French, Italian, Japanese, Portuguese, Russian as well as Spanish.

Novak Djokovic is the highest prize money earner of all time. World no.1 has crossed the $150 million mark in prize money. This is also higher than his long time rivals, Rafael Nadal ($124 million) and Roger Federer ($130 million).

Djokovic married Jelena Djokovic in 2014. The two had known each other since childhood and had been dating since they were in high school. He is father to a boy, Stefan and a girl, Tara.

Novak came out with a book called, “Serve To Win”, in 2013. The book highlights his diet and fitness regime which made him the top tennis player in the world. This book is also credited for starting the gluten free movement.

9) Owner of a restaurant

Djokovic, also called Nole, opened a restaurant in Monte Carlo in 2016. It is a vegan restaurant called Eqvita. Moreover, It is also a tribute to his childhood as his parents ran multiple restaurants.

Nole appeared in a music video for Martin Solveig in 2011. Called, “Hello”, the video features Djokovic playing on at Roland Garros against DJ Bob Sinclar.

These were the 10 unknown facts about Novak Djokovic. Stick around for more interesting articles and news about tennis.