Indian para-javelin thrower Sumit Antil breaks the world record thrice in a matter of six javelin throws on his way to the gold medal. Sumit is the world no.1 in the F64 category he competes in.

Sumit’s cause of diability

He is only 23 years old and belongs to Sonepat, Haryana. Sumit met a freak motorbike accident in 2015 which lead to the amputation of his left leg below the knee.

The Indian came out all guns blazing into the event. He broke the world record held by his compatriot Sandeep in the very first throw with an attempt of 66.95m. As if this was not enough he followed it up with another out-of-this-world attempt wherein he reached an almost insurmountable 68.08m.

Moreover, with his first two attempts, Sumit had set a new world record and also broke the newly set record.

Watch the video for how Sumit Antil breaks world record:

At one point Sumit was well ahead of the rest of his competitors as he was more than 5 meters clear of the second-placed athlete.

Australian Michal Burian won the silver medal with a creditable attempt of 66.29m. Whereas Srilanka’s Dulan Kodithuwakku clinched the bronze. 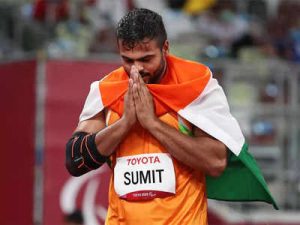 The select crowd was in for more drama as Sumit again broke his world record in his fifth attempt. This left everybody spellbound as the members of the Indian contingent were jumping with joy.

Interestingly, Sumit had also participated in the Indian Grand Prix series 3 on March 3rd in Patiala, Punjab. He was a part of a field of able-bodied competitors including the recently crowned Olympic champion Neeraj Chopra.

He finished a creditable sixth with his best attempt reaching 66.43 meters. Interestingly, even this throw would have been enough to secure gold for him at the Paralympic games.