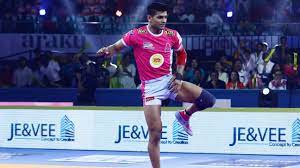 Deepak Hooda is an Indian professional Kabaddi player. He is also the captain of the Indian National Kabaddi team. Hooda plays at the position of an all-rounder in the game. He has been a part of the various clubs in the Pro Kabaddi League. He has played for Telugu Titans, Puneri Paltan, and Jaipur Pink Panthers over the years. Read further to know about Deepak Niwas Hooda Net Worth, Salary, etc.

Hooda made his debut for the Indian team in the 2016 South Asian Games and bagged the gold medal. He was part of the Haryana team that bagged gold at the Senior National level tournament in Patna in the year 2014. At the inaugural season of the Pro Kabaddi League in 2014, Hooda was a recipient of the second highest bid. In 2016 he joined the Puneri Paltan for the third and fourth seasons.

Hooda is one of the best played players of the Indian National Kabaddi team. According to several reports his net worth has grown considerably in 2019-2021. Currently he is alleged to have a net worth over $1.5 Million, which is over INR 11 crores. Deepak is a highly paid player in the Pro Kabaddi League.

Deepak Hooda Salary and Other incomes

This player’s major source of income is from the game Kabaddi. He is not known to have brand promotions and endorsements. The salary of the young player is INR 55 lakhs for the eighth season. However, his total income from the Pro Kabaddi League is INR 16.9 crores.

The captain of Indian Kabaddi team- Deepak Hooda has several achievements adoring him. To list a few: