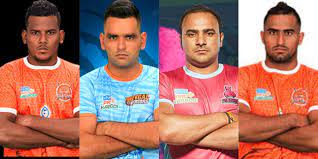 Defending is one one of the most difficult task in kabaddi. With some great raiders on the mat and their high speed and agility it adds more competition. But likewise, players have maintained some brilliant tackling form. So here is a list of the top five players with the highest successful tackles in PKL:

Have a look at Players With Highest Successful Tackles In PKL

Bought at RS.75LACS in season 8 Surjeet plays in right cover. Soon Surjeet will be seen in Tamil Thalaiva squad in season 8. He was a crucial point of the defense at the 2016 South Asian Games. Likewise in 2016 kabaddi World Cup he finished as the top defender by securing 26 points. After Puneri paltans responsibility he is going to handle right cover of Tamil’s side. Accordingly with 94 matches played he stands at fifth with 260 successful tackles in 94 matches.

With three consecutive season with Puneri paltan and season 7 with the U mumba side , he is bought by the Delhi side for RS.60LACS . Falling in allrounder category Sandeep has contributed his team with both raid and tackle points, having impressive 271 raid points along with 282 successful tackles in 125 appearances.

Season 7 described one of the best performances of Fazel , after he finished at the top with most successful tackles (77) .As a fact of matter In season 6 U mumba side bought him for RS.1CR and was retained in season 7 and now in season 8, with a handsome amount of RS.1.21CR. In summary, Fazel is one of those few foreign players that have made impact in pkl. Furthermore he stands at third on podium with 297 successful tackles in 103 mat appearances.

For instance Ravinder started his career with the Dabang Delhi side and named best defender in his debut season. In season 8 he is sold to Gujrat Giants for impressive 75 lac rupees . For the most part Ravinder has not been in his top form from few seasons, but the right corner is expected to make a comeback in this season. Including all matches played(112) he has 307 successful tackles.

Above all stands the mighty Manjeet with 324 successful points in 108 matches. To begin with , he has two gold medal at the Asian games. In 2015 he was rewarded with Arjuna Award for his excellent performances in kabaddi. Initially in the first season he emerged as the defender of the season with 51 tackle points. After being sold for 20 lac rupees to the Delhi side , the fans are again expecting him to be in his starting form.

For more such interesting kabaddi and sports new visit : The Sportslite