The SportsLiteSports at just one click!
HomeKabaddiTamil Thalaivas – Squad, Owners, History, Records, And Everything You Need To...
KabaddiPro Kabaddi League

Tamil Thalaivas – Squad, Owners, History, Records, And Everything You Need To Know 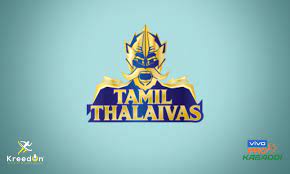 The Journey Of Tamil Thalaivas From The Inaugural Season Till Now

The team played their inaugural match in the fifth season of the league in 2017.

Meet The Squad Of Tamil Thalaivas

Who Is The Owner Of Tamil Thalaivas Kabaddi Team?

Tamil thalaivas is owned by a consortium known as Magnum Sports Private Limited. The consortium is built on the strong belief and foundation that Sports is a medium of empowerment. Sports is also one of the most important socio-cultural learning experiences for the athletic fraternity. Actor Vijay Sethupathi is the brand ambassador of the team.

Following are the top-performing players of Tamil Thalaivas in every season: