Saudi Arabia is coached by French professional Herve Renard, who is the first coach to win two African Cup of Nations with two different teams. 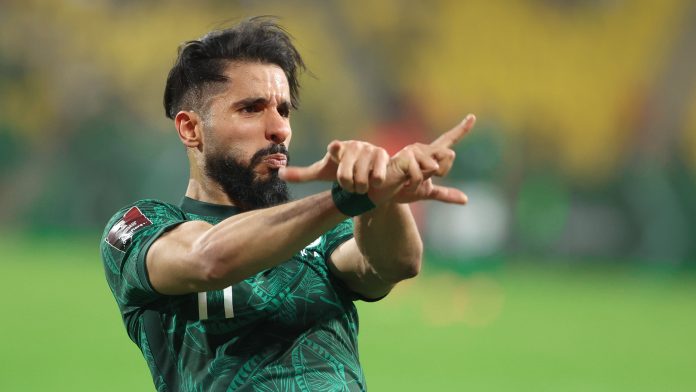 Saudi Arabia, an oil-rich country toiling in International geopolitics situated in the Middle East, is no newcomer to World Cup. The story of the Green Falcons of 1994 reverberates in every fan’s ears. The team, who upset Morocco and Belgium to reach the Pre-QFs, became the second Arab team to do so.

Saudi has won AFC Asian cup three times in the past and came second thrice. Talking about KSA, One should make sure to add the time when Saudi Arabia reached the final of the first King Fahd Cup (later Confederations Cup) in 1992 and a fourth in 1999. The Green Falcons reached the FIFA World cup on five occasions. Their best is in 1994 under Jorge Solari. They have played sixteen games in the prestigious tournament, won just three, and drew twice. The team consists of complete homegrown players from home clubs is a unique addendum to FIFA. Swipe down to read about where to watch KSA’s matches, their fixtures, and certain other deets.

Saudi Arabia – one of Asia’s top teams is drawn into Group C at the 2022 World Cup. They are added to Argentina, Mexico, and Poland in one of the toughest groups of the World Cup

Saudi Arabia is the lowest-ranked team (51) in the group. All the others in the group belong to the top tiers of the ranking. Saudi Arabia will have to put up their best performance in its history to achieve the next round. Can their all homegrown players upset the major players and walk into a historic Round of 16? Well, we will have to wait and watch.

Tickets for the Mexico match at the World Cup

The tickets for the FIFA World Cup 2022 are on sale at the official site FIFA. The tickets are available on a first come first serve basis and can be a lot to handle due to immense traffic happening on the sites for the same.

Where to watch Mexico at the Qatar World Cup 2022?

The FIFA World Cup 2022 is broadcasted over different countries all over the world. In India, Viacom18 broadcasts the entire World Cup. Online, JioTV and VootSelect live stream the game. People in Saudi Arabia and others in the Middle East and North Africa can watch KSA’s match on beIN Sports.