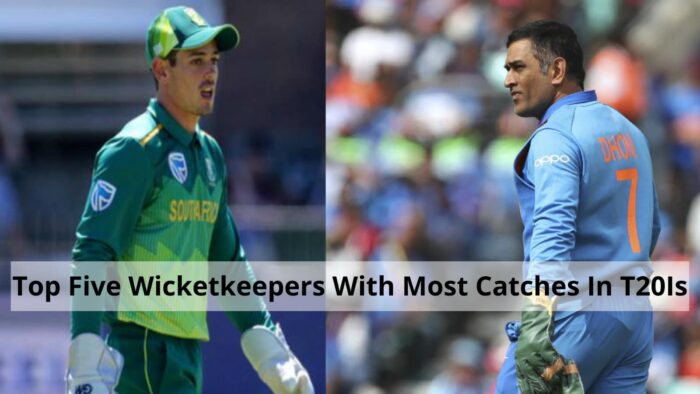 The characteristics of a keeper batsman in the late 1980’s and 90’s changed a bit – chirpy, safe pair of hands and handy with the bat. Being at a keeper’s place may seem the luxurious field position on the ground from the outside, but it indeed is the most conglomerate one. A wicketkeeper needs to have a very well coordination with the bowler, quick response time and a good presence of mind. In this article, we will look at how different keepers have fared in the T20 format. And look at the top five wicketkeepers with most catches in T20Is.

Sarfaraz as a wicket-keeper is an embodiment of the keepers from the eras gone by. However, he still has so far carved a niche for himself. For a country who have had a strong lineage of keepers in the form of Moin Khan, Rashid Latif and Umar Akmal, Sarfaraz had a career subpar. As a batsman though, he is busy bee at the crease and loves to churn out runs at a fastish clip. He is street smart cricketer and keeper and thrives under pressure situations. Being the skipper of the national T20 team, his numbers are bound to swell up as he loves playing as a floater in the batting order. Having made his T20I debut in 2010, Sarfaraz has so far played 61 matches for Pakistan and has 46 dismissals out of which 36 are catches.

Also Read: Top Five Wicketkeepers with Most Stumpings in Tests

On number four of the list of top five wicketkeepers with most catches in T20Is, is the explosive English keeper Jos Buttler. Buttler as a batsman may be extremely innovative but as a keeper he is quite copybook. He broke into the English team a second choice keeper, but his perseverance made him a regular representative of team’s white ball plans. Buttler made his T20I debut in 2011 against India. The 31-year-old has so far played 88 T20 internationals and has a lot more in his playing years in his satchel. Buttler has preyed 47 batters behind the stumps and includes 37 catches.

The Trinidadian-born Denesh Ramdin started out as fast bowler, but gave up on his ambition to concentrate wholly on keeping the wickets. Ramdin made his T20I debut in 2006 against New Zealand. Ramdin’s skills with gloves are always bragging but he has failed to perform to his potential. Right from the start, he set the bar high for himself. He impressed with his smooth and agile movements behind the stumps however his batting was still patchy. Ramdin’s wicketkeeping was impressive even on pitches where the ball would often die before reaching him. So far in his career, he has played 71 matches and has taken 43 catches and 20 stumpings to brag about.

Among the current lot of wicketkeepers, Quinny manages to capture your imagination, such a talent he is. Not only is de Kock a prodigious batsman, but the value he brings to the side by donning the gloves is tremendous. His fearless striking of the ball and handy glovework have earned him comparisons to greats of the game like Adam Gilchrist and Mark Boucher, early in his career. Having made his T20I debut in 2012, de Kock has managed to become an indispensable member of the South African squad. He has so far represented South Africa in 61 T20 internationals and has taken 49 catches.

Inarguably the best Glovesman to ever grace the cricketing fraternity, MS Dhoni tops the list of top five wicketkeepers with most catches in T20Is. A busy bee behind the stumps, MS Dhoni’s gloves work is unparalleled. He checks all the boxes when it comes to keeping and his unorthodox keeping skills are second to none. “There’s only one textbook that has MS Dhoni’s keeping (style) in it, and he’s the only one who’s read it”. This statement from one of the greatest wicket keepers ever, Adam Gilchrist, sums it all for Mahi’s wicketkeeping. World’s most decorated Keeper, MSD, has played 98 T20Is for India and has 91 dismissals to his name, 57 of which came as catches. He further has taken 5 catches in an innings, which itself is a record.