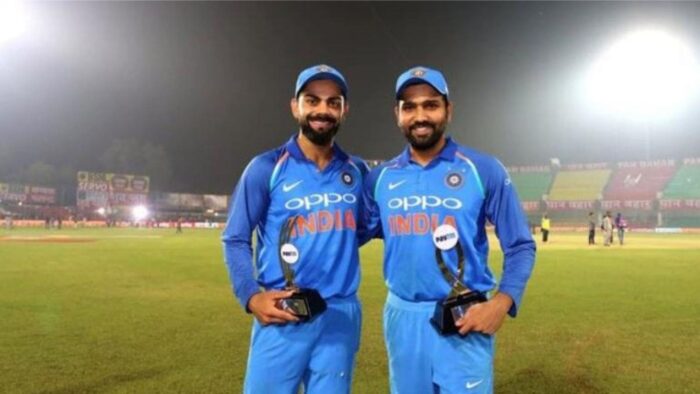 Cricket has evolved like anything else with time. Test matches were shortened to 60-over matches, then to 50-over matches, and then to the Twenty20 format. The thrill of Twenty20 Cricket boosted the popularity of Cricket. With batters being more and more aggressive than before, bowlers too showed their masterclass in this format. But the stature of all-rounders grows exponentially in T20Is. In this article, we will look at the top 5 players with most Man of the Match awards in T20Is. And to no surprise, three of them are all-rounders.

The Hitman of cricket, Rohit Sharma features in the fifth position among the top 5 players with most Man of the Match awards in T20Is. Rohit made his T20I debut in 2007 against England. He made his mark by scoring an unbeaten 50 from 40 deliveries against hosts South Africa in the quarter-finals of the first-ever T20 WC. In the final also he played a cameo of 30 runs from 16 deliveries, which eventually helped India lift the trophy. On 2 October 2015, Rohit scored 106 in the first Twenty20 international against South Africa at HPCA Stadium in Dharamshala. With that, he became the second Indian cricketer to have scored centuries in all three formats of international cricket. In 119 T20I matches, Rohit has 11 Player of the match awards to his name.

The “Professor”, Mohammad Hafeez, of Pakistan, has played 119 matches for Pakistan, bagging 11 Man of the Match awards. Hafeez is a versatile batsman who can bat anywhere in the top 6 and forms an integral part of the bowling attack. An all-rounder, known for his intelligent batting, Hafeez can play aggressive shots as well, when needed. After a lackluster 2019 ODI WC, Hafeez reinvented himself and found new life as a T20 specialist for Pakistan. This culminated in him being the leading run-scorer in T20I cricket in the world in 2020. On 20 December 2020, he brought about his career-best T20I score of 99* off 57 balls against New Zealand in their second T20I at Hamilton. On 31 July 2021, he bowled his most economic spell in the T20I against West Indies, giving away 6 runs off his 4 overs.

Also Read: Know the Top 5 players with the most runs in T20I for India

Shahid Afridi is widely regarded as one of the most cataclysmic batsmen to ever grab that willow. Afridi was as dangerous a bowler as he is as the batter. As dubbed by his fans and mates, Lala made his T20I debut back in 2006, when T20s were a bantling. Afridi’s game harmonizes with this shorter format and as a result, he became an indispensable part of Pakistan’s T20 plans. Afridi has played 99 T20I matches for his country and was bestowed with the Player of the Match award 11 times. He has taken 98 wickets and has scored 1416 runs in T20 Internationals.

The modern-day all format great, Virat Kohli appears on the second spot in the list of top 5 players with most Man of the Match awards in T20Is. Having made his T20I debut in 2010, Virat has so far played 95 T20 matches for India. He has scored 3,216 runs at a staggering average of 52.72. The Run machine of India has played plenty of match-winning knocks for his team. However, Virat gave his T20I captaincy after the 2021 T20 World Cup, he remains an imperative part of the Indian Team. He is the only player in T20 WC history to win successive Man of the Tournament awards. Kohli was adjudged the Man of the Tournament in the 2014 and 2016 editions of the World T20. He has amassed 29 fifties so far with the personal best score of 94*. Virat has 12 Man of the Match awards so far.

The Afghanistan veteran, Mohammad Nabi, tops the top 5 players with most Man of the Match awards in T20Is. The current T20I captain of Afghanistan, Nabi, has seen the rise of the team through ranks. He is undoubtedly their most bankable player. A team man, who adopts the strategy as per the requirement of the game, Nabi is a sine qua non of his team. He singlehandedly has won many matches for Afghanistan. The experience that he brings to the team is unparalleled. Nabi is the first Afghan player to be selected in the IPL player auction, which speaks much about his potential. The Afghan all-rounder has played 86 T20Is and has been named the Player of the match 13 times.