The SportsLiteSports at just one click!
HomeCricketPakistan VS West Indies 2nd T20I – Who Won MOM In PAK...
CricketPlayer 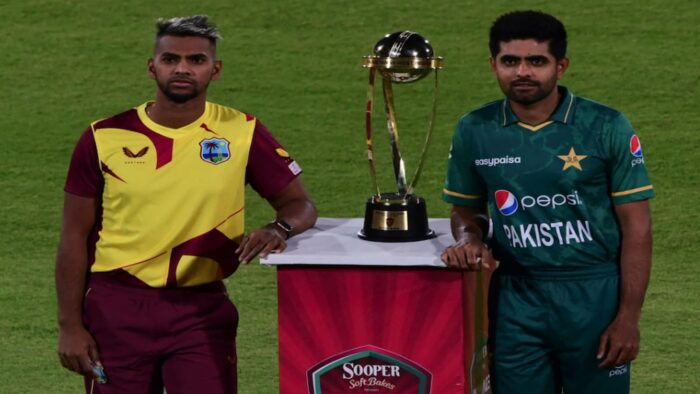 And we are into the 2nd T20I played between Pakistan and West Indies. Pakistan lost Babar Azam for a 2-ball duck in the very first over yesterday. But that didn’t stop the hosts from posting a huge total. It was a top notch performance by the home team. West Indies gave a poor show in the 1st T20I. Barring Akeal Hosein’s 1/19, there was hardly any notable performance. And Pakistan are looking to seal the series tonight. Let’s see what happened in 2nd T20I between Pakistan and West Indies. We will also see who won MOM in PAK vs WI 2nd T20I.

After winning the toss, Pakistani captain decided to bat first. One again, West Indies struck early in the match. Today also Babar Azam and Fakhar Zaman got out without scoring much. And once again it was the duo of Rizwan and Haider Ali who built a partnership after losing Babar and Fakhar for not much. But West Indies kept taking wickets when the batters were set for a big one and threatened to derail the innings. In the middle overs, West Indies controlled the game. At that time, 150 was looking difficult. But at the end, Iftikhar Ahmed and Shadab Khan played two brilliant cameos with the bat to take the total to 172. Once again Akeal Hosein was the pick with the ball with Hayden Walsh also chipping in. West Indies now have a target of 173 runs in 20 overs.

And Pakistan also managed to chip in the early wickets just like West Indies. West Indies were able to score 50 runs in the first 6 overs with the loss of 2 wickets. It was a terrific innings at top by the opener Brandon King. though he could’ve accelerated a little more when he was in. But with the fall of wickets on the other side, this is the type of innings required from him. Pakistan bowlers applied pressure on the bowlers and equally shared the spoils. But this match was alive till the end. Shephard did try a lot in the end as he went unbeaten for 35 runs. And Pakistan have won this match by 9 runs. This was the tight game and Pakistan got hold of the pressure situation. With this win, Pakistan also win the 3 match T20I series.

Shadab Khan, for his brilliant cameo at the end and for his economical bowling, was awarded the Man of the Match in Pakistan vs West Indies 2nd T20I. Shadab provided the finish that Pakistan wanted with the fall of the wickets. He scored unbeaten 28 runs of just 12 balls which included 3 sixes. He had mentioned in Post Match conference that he practiced this type of batting in the nets. With the bowl he bowled an economic spell. Though, he didn’t get wickets but he gave only 22 runs in his 4 overs. If Shadab hasn’t scored those runs in the end, the result might be different for Pakistan. This shows how crucial those runs were.

And with this win, Pakistan won the series with 1 match remaining. They have also now 19 T20I wins in 2021. This is the most by any team in a calendar year. West Indies bettered their performance from the 1st T20I, but they still fell short of runs. West Indies came close today but couldn’t finish the game.