Top 5 Players with Most Sixes in International Cricket 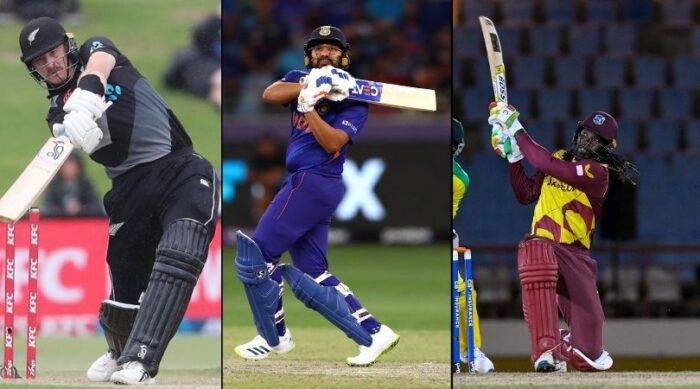 In modern-day cricket, where the size of the grounds has seen a reduction, batsmen sometimes are more inclined towards hitting fours and sixes rather than rotating strike, especially in the limited overs formats. The big hits by the batsmen are more adored and lauded by the fans than the conventional ones and twos.
With the quality of bats improving regularly, hitting boundaries has become much easier for the batsmen. And then, there are some batsmen who believe in sending the ball all the way across the fence, whenever possible, showing no remorse for the bowlers. Hitting a six is widely considered to be one of the biggest game-changing abilities that a batter could possess in modern-day cricket. Here’s a list of top 5 players with most sixes in International Cricket.

Martin Guptill has been one of the mainstays of New Zealand’s batting in white-ball cricket over the years. A key feature of Guptill’s batting is the rhythm of his stroke play. When in flow, he is a very difficult batsman to stop because of his impeccable ability to deal the pacers as well as spinners.

There have been several impact knocks by Guptill over the years, most of which have single-handedly destroyed the opponents. He even held the highest individual score by a Kiwi (189) before breaking it himself in the 2015 World Cup.

The master of innovative shots, Brendon McCullum was one of the rare cricketers who single-handedly controlled the course of the game. The Kiwi superman never cared about the bowlers at the other end and always looked to play the ball on its merit. If the delivery is in his arc, McCullum never hesitated to take it over the stands.

Throughout his international career, the Kiwi batsman batted at different positions but never hesitated to take on the bowlers. With unusual shot-making ability and the ability to create great angles, McCullum was a master in hitting sixes.

Also Read: Top Five Players With The Most Sixes In A T20I Inning

‘Effortless’ is the word that comes to our mind when Rohit Sharma is clearing the ball into stands. The modern day Hitman is a class apart when it comes to hitting sixes in International cricket. And the hunger for runs- 3 double centuries in ODIs- makes Rohit even more dangerous.

With age on his side and redefined skills, Rohit in the days ahead will definitely climb up this chart.

And the best part of Afridi’s batting was his ability to clear the ropes with ease.

“Universe Boss” for a reason. Top order batsman Chris Gayle sits pretty at the top in the list of Top 5 batsmen with most sixes in International cricket. In a career spanning over 20 years, Gayle has been known for hitting the ball big. Gayle has smacked an infinite number of bowlers into the stands in his career.

He is a different level of player in T20 Cricket.

Top 5 players with most sixes in International Cricket