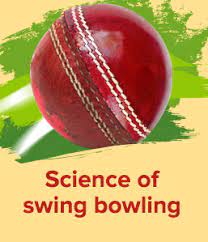 Swing bowling is a technique used for bowling in the sport of cricket. Practitioners are known as swing bowlers. Swing bowling is generally classed as a subtype of fast bowling. In this article we will analyze how Cricket balls swing.

The aim of swing bowling is to cause the ball to move in the air (or ‘swing’). It mainly focuses on delivering fast-paced balls to the batsman. It is done in the hope that the change in the ball’s flight path will deceive the batsman. Swing bowling is not to be confused with spin bowling. Spin bowling involves bowling slow-pace balls which change direction primarily after making contact with the ground.

Swing bowling involves the use of a newer ball which is only slightly worn. The bowling side will continually polish one side of the ball by applying saliva and sweat to it . As well as rubbing the ball against their clothing to shine it, whilst leaving the opposite side unshined. Swing bowlers will often use a subtly altered grip on the ball to accentuate this effect.

The purpose of swing bowling is to get the cricket ball to deviate sideways as it moves through the air towards or away from the batsman. To do this, the bowler makes use of six factors:

Asymmetry of the ball is encouraged by the polishing of one side of the ball by the fielding team. And allowing the opposite side to deteriorate through wear and tear.

Cold and humid weather are said to enhance swing. Colder air is denser and so may affect the differential forces the ball experiences in flight.

Typically, a swing bowler aligns the seam and the sides of the ball to reinforce the swing effect. This can be done in two ways:

Typically, bowlers more commonly bowl outswingers, as they tend to move away from the batsman, meaning he has to “chase” the ball to hit it. Hitting away from the batsman’s body is dangerous, as it leaves a gap between the bat and body through which the ball may travel to hit the wicket. Also, if the batsman misjudges the amount of swing, he can hit the ball with an edge of the bat.

Normal swing occurs mostly when the ball is fairly new. When the ball becomes very old – around 50 or more overs old – it begins to swing towards the shine. It is mainly helpful for bowlers in Test matches. This is known as reverse swing, meaning that a natural outswinger will become an inswinger and vice versa. However, the new ball may reverse its trajectory if the speed is high (more than 90 mph). This is also called as contrast swing or reverse swing.

Reverse swing tends to be stronger than normal swing, and to occur late in the ball’s trajectory. This gives it a very different character from normal swing, and because batsmen experience it less often, they generally find it much more difficult to defend against. It is also possible for a ball to swing normally in its early flight, and then to alter its swing as it approaches the batsman.

Pioneers and notable practitioners of reverse swing have mostly been Pakistani fast bowlers. Sarfraz Nawaz introduced reverse swing into international cricket during the late 1970s, and passed their knowledge on to their team-mate Imran Khan, who in turn taught the duo of Wasim Akram and Waqar Younis. The English pair of Andrew Flintoff and Simon Jones, having been taught by Troy Cooley and the Indian bowlers like Zaheer Khan and Ajit Agarkar, were also well known for the ability to reverse swing, among many others. Bowlers tend to disguise the direction of reverse swing by running up starting with the opposite hand before switching hands and covering the ball for as long as possible before release. Neil Wagner utilizes this to show the ball is reversing, but disguises the direction of swing.

How to play swing bowling?

Firstly, a batsman needs good eye reflexes which are considered to be a key skill when facing swing bowling. Secondly, a batsman often needs to anticipate beforehand what the ball will do and adjust accordingly to play swing bowling. This can be done by observing the bowler’s grip and action (which may have a marked difference depending on which type of swinger is to be delivered), by observing the field set, which may depend on the types of deliveries expected (as a rule outswingers will have more slips assigned) or by means of prior knowledge of the bowler; many can bowl or are proficient in only one type of swing.

Traditional methods include the batsmen playing the ball as late as possible, and not playing away from the body. Other effective measures for combating swing bowling include standing well outside the crease, thus giving the ball less time to swing; and guessing the direction of swing based on the seam position observed in the ball’s flight.