The evolution of cricket bats 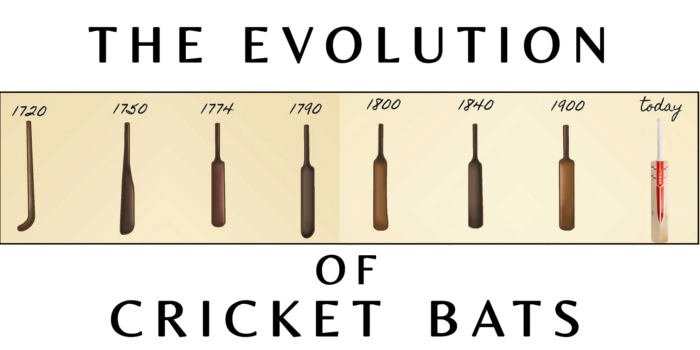 The evolution of cricket bats: Cricket is a game that has evolved since its birth. There were timeless Test matches, which then became a five-day fixture, with 50 overs format came to the world cup and different competitions, commercialization brought money to the game, with money came the T-20, T-10S, the Hundred. The technology evolved, the game is now completely dependent on technology. You would be incredulous if I tell you the bats also have been affected positively by technology.

Well, the cricket bat should be made up of wood, any other material is prohibited. Here the term technology is more for the question ‘ how to get the most out of wood’. So with evolving science, the bat manufacturers started to understand that different shapes of bats give different output and different durability.

In the early 1600s, cricket had always been underarm, so the bats were similar to modern hockey sticks.

In the late 1700s and early 1800s, as the bowlers were allowed to bowl overarm, the shape of the bat changed drastically and it became somewhat similar to a rectangle with a relatively small width.

Bats started to have their typical shape : The evolution of cricket bats

Around the 1820s, the bats started to have a shape similar to modern bats that we are familiar with. The bats started to become more light. Around the same time, the back of the bat started to have a ‘swell’. With the swell, even with lighter weight, the bat started to produce more power. The swell also gave rise to the term ‘sweet spot’. When a ball hits the sweet spot, it travels the maximum distance, with maximum power, but with minimum effort, provided that the batsman has all the things up to the mark while playing the shot.

Marylebone Cricket Club (MCC), around the 1870s, eliminated all the irregularities in the bat shapes by setting up the rules for bat shape. In those days the bats didn’t have separate handles and blades, but with more experience of bats breaking, the manufacturers around the 1870s started to make a bat with separate handles and blades. You would have seen the ‘V’ at the neck of the bat, which shows the handle and blade have been glued together, they have been made differently.

The evolution of cricket bats: Moving to the modern bats

Slazenger, the bat manufacturer, was the first to manufacture a shoulderless bat, which helped in proper weight distribution. This was in the 1960s.

Many would have seen how tennis cricket bats in India are made. The manufacturers remove the swell and they create a kind of cavity by removing the wood. The cavity is only at the center of the backside of the bat.  This makes the bat even lighter. 1974 was when the same kind of bats named GN100 Scoop was launched in international cricket.

In 2005, Kookaburra launched a bat that had carbon fiber-reinforced polymer. It increased the life of the bat.

Since the late 2010s. there hasn’t been much change in the shape of a bat, they have become more standard now.

Around 2015 as there was no restriction on the edge and swell of the bat, they used to be extremely thick. So MCC came up with the bat gauge; if the bat entirely goes through that particular gauge, then it’s good to go,  otherwise, it’s not.

What does the Rulebook say?

On a lighter note, let’s see some funny and interesting bats

In 1971, the bat named ‘Monster Bat’ came in. The match was between Chertsey and Hambledon. The batsman of Chertsey batted with the Monster that had a width equal to the width of stumps.

In 1979, Aussie Dennis Lille used a bat called ComBat, made of aluminum.